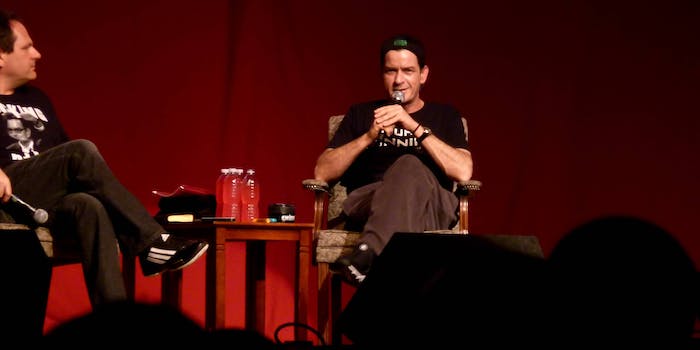 Sheen's got a tender spot in his heart for those who've had it rough in entertainment.

Even in his darkest hour, Brian Williams is not without his champions.

On Tuesday, the NBC anchor was suspended for six months without pay following the revelation that he falsified claims of coming under attack during his coverage of the Iraq War in 2003. Though the anchor and managing editor of Nightly News issued an apology on air for his mistake, many have derided the reporter on social media for his actions.

Wednesday evening, Charlie Sheen took to TwitLonger to pen a rather unique free verse poem for the man he calls “a true Patriot” and “a hero in my/’Entire Library.'” The poem, which is comprised of seven stanzas, sings Williams’ praises quite beautifully before taking a turn for the paranoid and alleging that his suspension is part of a “transparent and vile/witch hunt!”

Dear Mr. Williams,
Sorry to bother you during this most surreal, unjust
and mercurial moment in
your awesome life.

First off,
THANK YOU,
for 24 years of inimitable
professionalism and top
shelf brilliance,
as a stone cold
passion driven and
(PERFECTLY) fact based journalist.

Secondly,
Thank you “squared”
for delivering not only the news on a nightly basis,
(PERFECTLY)
to myself and my family.
But for every other person alive,
(with a TV)
who relied
and still do,
on your poetic, insightful
and NOBLE sacrifices,
that made our longest nights
shorter,
and our shortest nights
safer.
You good sir,
are a hero in my
“Entire Library”

Lastly;
you are clearly the victim of
a transparent and vile
witch hunt!
Erroneously
“staged” by hooligans,
non coms, cowards and
oligarchs,
who’s only
desperate and
hideous goal is to discredit
the genius that they relied
on for almost 3 decades!

Mr W:
respect
love
hi 5’s
and refuge!
(if you need it!)
I remain humbly
and on
dangerous standby
at your service….

Perhaps Sheen was moved to pen a few verses for his fallen comrade given his history. You’ll remember the actor enjoyed a public falling out with the creator of CBS’s Two and Half Men and was fired from the show, prompting a subsequent meltdown that dominated pop culture for the remainder of 2011.

Though it’s no free “Winning” T-shirt, the poem is thoughtful none the less. Long live “the MaSheen!”