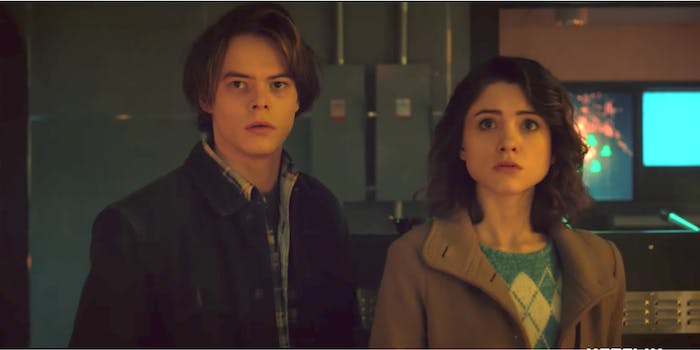 Looks like Will isn’t the only Byers boy making a scene this season.

Stranger Things actor Charlie Heaton, was denied from entering the U.S. last week after trace amounts of cocaine were found in his luggage, the Associated Press has reported.

According to an anonymous law enforcement official, Heaton, a British national who plays Jonathan Byers on the show, flew into Los Angeles International Airport last Saturday. Heaton had his luggage sniffed by a customs dog, which found a small amount of cocaine.

Heaton wasn’t arrested or charged but was refused entry in the country. As a result, he missed the Westwood premiere of the second season of Stranger Things.

Heaton reportedly returned to London. The AP reported that his publicist hasn’t responded to requests for comment.

“Foreign nationals may be inadmissible due to the commission of a crime involving drug possession,” Jaime Ruiz, branch chief of strategic media engagement for U.S. Customs and Border Protection, told the Hollywood Reporter. “CBP officers treat all international travelers with integrity, respect and professionalism while keeping the highest standards of security.”