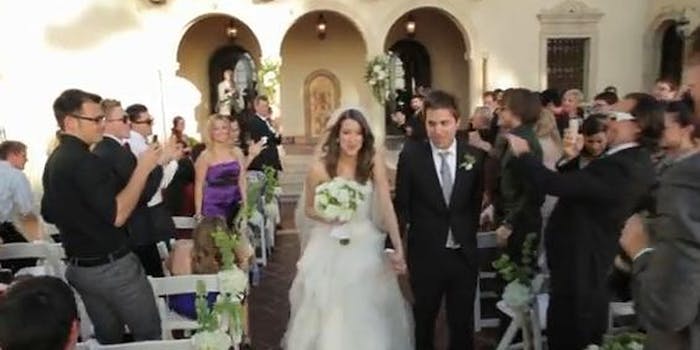 In YouTube Right Now, the Daily Dot looks at videos that catch our eyes, push our buttons, or move the dials—and that you’ve just got to watch. Right now.

Don’t underestimate the power of YouTube fame: Two prominent YouTubers recently got married, and their wedding was a worldwide trending topic on Twitter.

“We have the greatest viewers in the world. I went to log into my Twitter account, and I see CTFxCWEDDING as one of the top trends worldwide. What!?” says Charles Trippy in his 30-minute video of the wedding.  “You guys are freakin’ unbelievably awesome.”

Charles and Alli Trippy (née Speed) have been YouTubers since 2005, and their joint channel, Internet Killed Television, which began in 2008 with the username CTFxC, has collected more then 228 million views since.

Multiple videos of the wedding, the run-up to the event, and their honeymoon have collected hundreds of thousands of views and comments in the last couple of days.

Toby Turner, another prominent YouTuber who was invited to the wedding, vlogged about it, as did iJustine. (Alcohol appears to have costarred in both of their videos.)

The top two videos of Charles and Alli Trippy’s wedding are the videos they themselves released: the official wedding video and 30 minutes of behind-the-scenes footage. Both videos were among the top favorited today, and rocked the charts in YouTube’s People & Blogs and Film & Animation categories.

“Easily the most﻿ beautiful video in CTFxC history. <3” writes BrittJzee, a top comment on the official wedding video.

YouTubers, besides leaving congratulatory comments, have taken to vlogging about the wedding, and the footage found on YouTube.

It’s easy to understand their excitement. When traditional TV-celebrity weddings have devolved into Kardashian territory, true love seems all the sweeter.