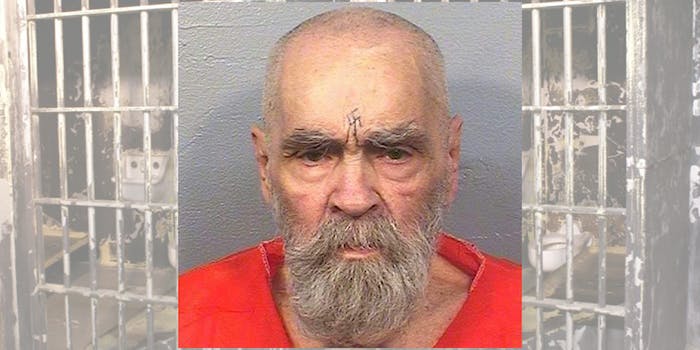 The infamous murderer's health had been falling him of late.

American cult leader and criminal mastermind Charles Manson passed away from natural causes in Bakersfield Hospital in California on Sunday night at the age of 83.

The convicted mass murderer and cult leader of the notorious “Manson family” was behind the murder of seven people, including actress Shannon Tate in 1969. Two years later, Manson was found guilty of first-degree murder and conspiracy to commit murder. Originally sentenced to death, Manson was spared execution when California temporarily banned the death penalty that following year. He was instead sentenced to life in prison at California State Prison in Corcoran.

Prior to his infamous conviction, Manson spent most of his life committing offenses that also earned him jail time, including burglaries of liquor stores and auto theft.

After being released in 1967, Manson moved to San Francisco in hopes of pursuing a musical career. It was there that his position as a cult leader took off, where he attracted various young men and women with sex and drugs. There, he manipulated Bible verses to help grow his prophet-like demeanor. Still hoping for a career in music, Manson and his followers moved to Southern California in 1968, where he was able to meet Dennis Wilson of the Beach Boys. The band ended up recording one of Manson’s song’s, “Never Learn Not to Love,” on its 20/20 album, and also introduced him to record producer Terry Melcher.

When the Beatles released “Helter Skelter” that same year, Manson believed the song would incite a race war, in which Black people would rise up and slaughter white people. He predicted it would occur in the summer of 1969, and when nothing happened, Manson convinced his followers they needed to start it themselves.

The Family’s notorious act took place on Aug. 9, 1969. Manson, also upset his musical career did not take off, planned to attack Melcher’s home in Los Angeles. At the time, however, Melcher no longer lived there and was renting the property out to director Richard Polanski and his wife, actress Shannon Tate. Ordered by Manson, four of his followers entered the property and murdered Tate, her unborn baby, and four others. The next evening, his followers brutally killed two others, Leno and Rosemary LaBianca, breaking into their home in Los Angeles home as well.

In December of 1969, Manson and four of his followers were arrested and the tried for the Tate and LaBianca murders. All were found guilty.

Manson was denied parole countless times. His next hearing was scheduled for 2027. He was hospitalized in January due to gastrointestinal problems.