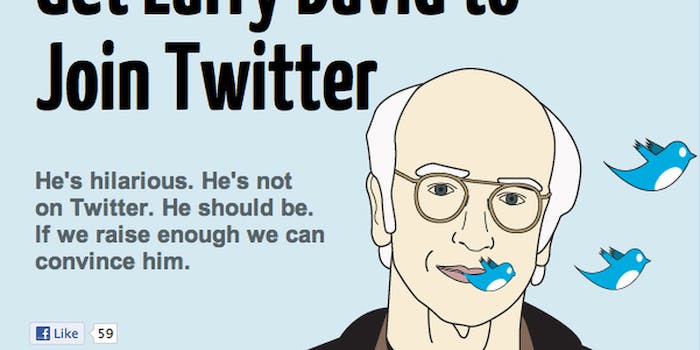 A new site gives you the chance to make celebrities do ... whatever you want.

The people have spoken: they want Larry David to join Twitter. They want it to happen so badly, in fact, that they’re willing to pay for it.

Charitybribes.org is a new crowdfunding site that raises money for charity in the hopes that celebrities will respond to an irregular, fan-generated request. Thanks to the site, a group of David supporters have pooled more than $1,500 for the Natural Resources Defense Council (NRDC). The donation is contingent on the Seinfeld and Curb Your Enthusiasm creator joining Twitter.

“He’s hilarious. He’s not on Twitter. He should be,” reads the campaign’s call to arms. “If we raise enough we can convince him.”

Fundraising continues until April 12, and after that, David has 30 days to act on the bribe before the donation offer gets spiked.

The campaign to get Larry David on Twitter is the first campaign to go live on Charity Bribes, which launched on March 13 as the brainchild of New York City copywriters Chris Baker and William Spencer.

There is no limit to the amount that backers can donate on the site. CB hopes that the larger the donation offering gets, the harder it will be for celebrities to turn down.

The site runs one campaign at a time and folks are already lining up with suggestions for the next bribe. The early frontrunner, posted by Mark Schruntek, is dubbed: “Get Conan O’Brien to wear an eye patch (and turtle neck, also holding a pipe) while interviewing a guest on his show. If asked about it, he should say ‘I don’t want to talk about it.’’ It has received over 890 votes and pledges to give its earnings to Autism Speaks, if O’Brien acts on the bribe.

Other ideas in the running include: getting “Morgan Freeman to spend an afternoon narrating user-submitted animal videos (with money going to the American Red Cross)”; getting “Garth Brooks to remake hip hop artist Sapients song ‘My grind is tech’ (Parkinson Center of Oregon)”; and getting “Donald Trump to post a picture of how his hair looks when we wakes up.”

Something tells us Donald Trump won’t be heeding that call unless the charity is in his own back pocket.