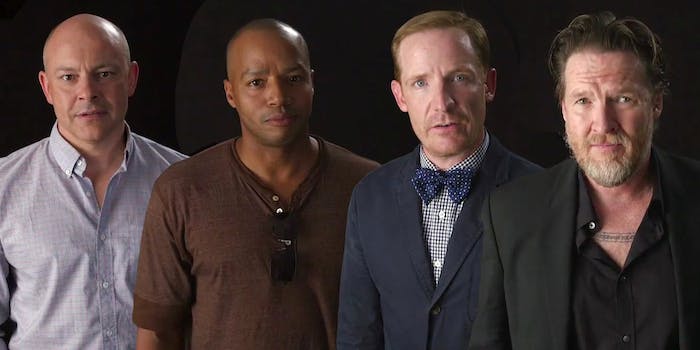 These character actors have a message for Hollywood

They're not just that guy from that thing any longer.

Sick of being “that guy from that thing” in perpetutity, some of the best known unknnown chracter actors have gathered on Entertainment Weekly‘s YouTube channel for an impassioned plea to Hollywood: make them superheroes.

While character actor Chris Pratt made the magical leap from “that guy” on shows like Parks and Recreaction to full-fledged movie star in Guardians of the Galaxy, he did so after losing weight and toning up to fit the action hero persona. Now the character actors of Hollywood have a new idea for the powers that be. Maybe instead of buff superheroes, they give the character actor a chance to be a superstar just how the are: balding, chubby, and a little weird-looking.

Now it’s time for Hollywood to recognize the genius of these men (not shockingly, even a parody video about everyday superheroes ignores the idea of female ones) who’ve put their cinematic time in as office workers, best friends, and “other thankless roles.” Now they’re coming for the tentpoles.