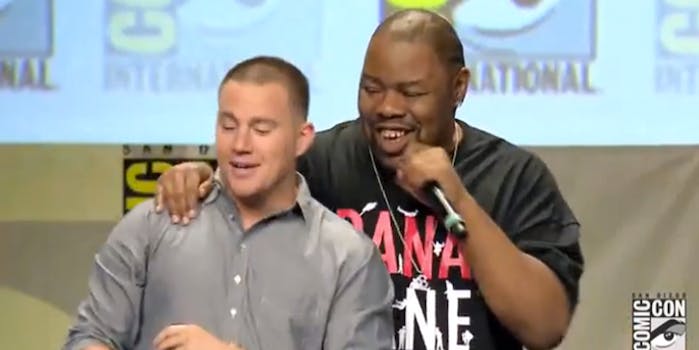 Sadly, we did not get a Ron Perlman freestyle.

San Diego Comic-Con is a rarefied realm, a place where Peter Jackson can walk around as an evil jester and Lee Pace and Andy Serkis photobomb sleeping fans. And now, we have Biz Markie dueting with Channing Tatum.

This happened Friday, when Tatum was promoting his upcoming animated film, The Book of Life, which also features Ron Perlman and Christina Applegate. Biz Markie’s classic song, “Just a Friend,” appears in the movie. As the director, Jorge Gutierrez, was explaining the soundtrack, the moderator introduced Biz Markie, who bounded out on stage and immediately launched into the song. When he passed the mic to Tatum on the chorus, the actor flubbed the words a bit, but no one probably noticed. Sadly, we did not get a Ron Perlman freestyle.

The real news we’re waiting for out of Comic-Con: When is the Channing Tatum/Biz Markie buddy cop movie coming out?