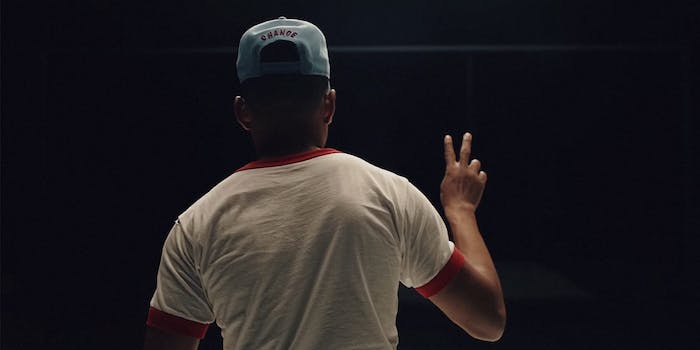 Chance the Rapper ditches genre conventions and embraces the challenge of choreography as the star of Francis and the Lights’ “May I Have This Dance” video, which is comfortably the best we’ve seen this week.

His vocals on the song itself are but an interlude, though he dazzles on them just the same, sing-rapping to his daughter: “You’ve got your mother’s eyes… your daddy’s discernment.” But it’s the movement that stuns: The Chicago hip-hop star twirls with purpose and vigor, taking cues from director Jake Schreier.

Like most of the 24-year-old artist born Chancelor Bennett’s music, it’s a slab of prime rib that fits into hip-hop, and celebrates the percussive nature of the music by—wait for it—gliding into dance with triumph and happiness.

As for Francis and the Lights, the electronic clique has been a hip-hop ally ever since they covered Kanye West‘s “Can’t Tell Me Nothing” back in 2009. In July, West appeared in the band’s similar “Friends” video alongside Bon Iver, though he didn’t bother to learn the routine:

Let’s get some more dudes on the dance floor this summer.