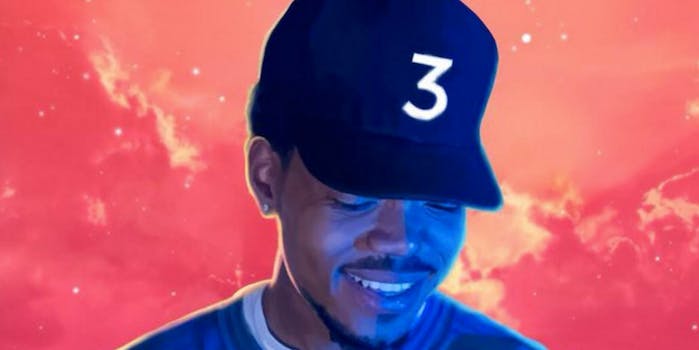 Another win for the independent artist.

Chance the Rapper‘s new mixtape Coloring Book is the first streaming-only release to chart on the Billboard 200.

The album was released as an Apple Music exclusive on May 13 and also appeared on mixtape platform DatPiff, where it existed for 11 hours before being pulled, allegedly for being an unauthorized version. But not before it saw 141,000 downloads. However, DatPiff does not report its streams to Nielsen.

Billboard reports that the album debuted at No. 8 on the chart with 38,000 equivalent album units, which equates to 57.3 million streams—most of them from Apple Music.

Chance’s album just barely holds that title, though. Last month, Kanye West‘s The Life of Pablo landed at No. 1 on the chart based almost exclusively on streaming, and continues to see 99.93 percent of units generated form streams. Chance’s verse on West’s “Ultralight Beam” is self-aware: “He said let’s do a good-ass job with Chance three/I hear you gotta sell it to snatch the Grammy.” The rapper has focused on staying independent in a rapidly shifting digital landscape. He told the Wall Street Journal last fall:

A song is a song. It’s for people to sing. There’s not supposed to be somebody above it, dictating where it goes, when it gets released, what percentage you get of it. I think there is a breakdown coming. People will start to understand that there’s no need for the middle man.

This past weekend, Chance invited fans in Chicago to his Magnificent Coloring World, a listening party that included a bounce house and carnival games.

Coloring Book is exclusive to Apple Music until May 27.