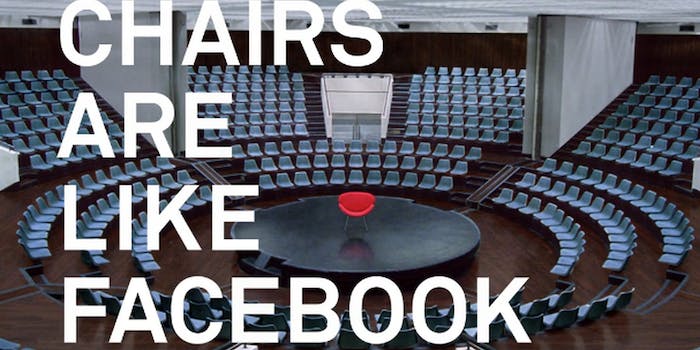 From Clint Eastwood to Facebook, chairs are taking over the world

Is it just a coincidence that chairs have taken center stage in some of the biggest news stories of the year?

Chairs are on the rise.

Clint Eastwood understood this. His great foe at the Republican convention earlier this year was a powerful chair, a foul-mouthed chair, a machiavellian chair. It was President Obama incarnate (in chair form).

Chairs: it’s their moment. Just ask Facebook. The social network announced Thursday it had reached 1 billion users. Short of its IPO, that’s about the biggest news from Facebook land in the past five years. But rather than hog the limelight, Facebook decided to celebrate its big day with an ode to chairs, clearly hoping their good standing with the public might rub off on the social networking giant.

The finely-crafted message had been in the works for over year, as Facebook closely worked with award-winning ad firm Wieden & Kennedy.

“We tried to figure out what it is that the company’s really interested in,” Wieden Creative Director Karl Lieberman told AdAge. “There’s a quote by David Kennedy that I really love: ‘Great brands don’t talk about themselves, they talk about what they really love.'”

The video veers off track , however, when Facebook’s love for chairs gets muddied with other, confusing metaphors. Facebook is also like doorbells, the ad tells us, and airplanes, and basketball, and dancefloors–none of which hold the simple, regal elegance of a chair. And, frankly, none of which you’re likely to sit on for very long–well, except for a dancefloor. But nobody sits on dancefloors, really.

“The universe. It is vast. And dark. And makes us wonder if we are alone,” the video concludes.

But we know we’re not really alone, the piece hints. Because chairs. And Facebook.