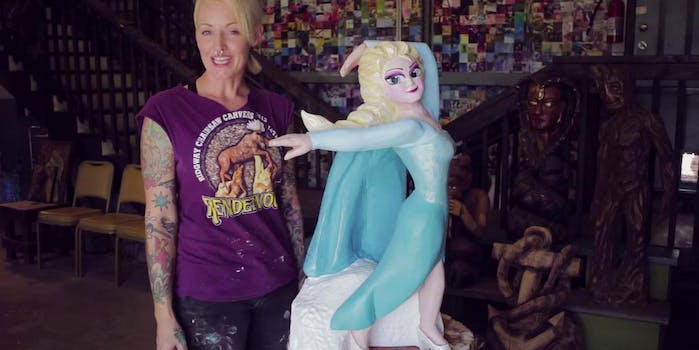 Forget the "Let It Go" covers, this is the only Frozen tribute you need to see.

To say that chainsaw artist Griffon Ramsey is a master of her craft would be an understatement. Though she’s been showcasing her carving efforts on her YouTube channel for the past three years, she only recently began translating her love of pop culture into wood for the world to see.

First, it was her Groot sculpture that garnered critical acclaim. After all, it takes a lot of skill to turn one tree into another tree. But being the master of elements she is, Ramsey endeavored to challenge herself by taking things a step further and sculpting wood into ice with a carving of Frozen’s Elsa.

Thankfully the hum of Ramsey’s chainsaw drowns out all the parodies and covers of “Let It Go,” because almost a year after its release, this original and rugged tribute to the film is the only one we wanna see.