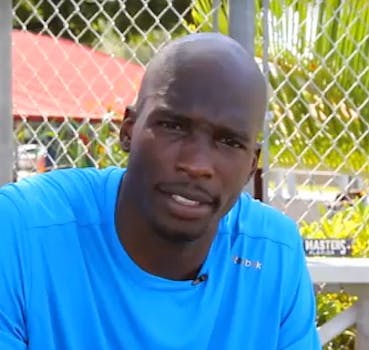 The NFL wide receiver—who has a reputation for random acts of kindness on Twitter—reached out to a follower who had recently lost her husband of 30 years.

Chad Ochocinco occasionally gets some flak, but there’s no denying he’s a genuinely generous guy when it comes to his fans.

Ochocinco asked Minton if she had a passport before extending an invitation to his nuptials. The 34-year-old then told Minton to start packing and his fiancé would make the arrangements, adding that he would see Minton “tonight/early a.m.” An appreciative Minton said she was “flabbergasted,” and expressed her love for him.

The wedding is set to take place Wednesday, Ochocinco revealed on Twitter, though it seems he and his fiancé Evelyn Lozada have had a little trouble finding a Miami hotel to host the occasion.

It’s not the first time Ochocinco has shown kindness to his Twitter followers. Back in March, he invited hundreds of them to dinner and picked up the tab, while he was incredibly grateful after a follower found and returned his stolen wallet.