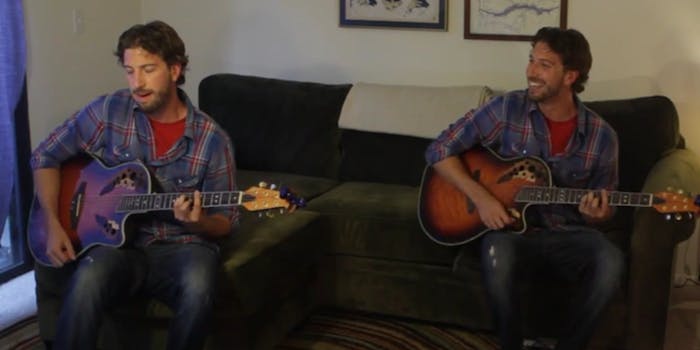 This 1-minute medley will ruin pop music for you

All music is a form of borrowing, but this YouTube video really puts it in perspective.

YouTube musician Chad Neidt is Internet-famous for his one-minute mashups and medleys. For his latest exercise in musical efficiency, he decided to tackle the theme of ripped-off songs, and filmed himself dueting with himself, performing both the originals and the rip-offs for context.

There are the obvious offenders: Lady Gaga’s “Born This Way” is practically a Xerox of Madonna’s “Express Yourself,” which might not have been so obvious if Gaga wasn’t also mirroring Madonna’s sartorial aesthetic. The foundational beat in Vanilla Ice’s “Ice Ice Baby,” likewise, was proven to be extracted from Queen’s “Under Pressure” two decades ago.

And then there are a few more contemporary finds: Fun’s “Some Nights” sounds an awful lot like Simon & Garfunkel’s “Cecilia,” and One Direction’s “What Makes You Beautiful” borrows liberally from Grease’s “Summer Lovin’.” (This isn’t the first time 1D’s been accused of copying.)

All music is a form of borrowing and influence, but perhaps the most amusing finding from Neidt’s musical experiment is that the Internet’s favorite punching bag, Nickelback, ripped off… themselves.