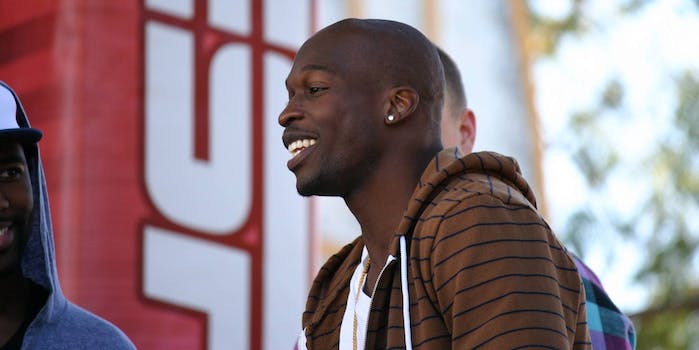 Chad Johnson lands job with Browns after badgering them on Twitter

If at first you don't succeed, blow up the mentions.

Chad Johnson—formerly known as Chad Ochocinco—hasn’t played in an NFL game since 2011, but that doesn’t mean the longtime Cincinnati Bengals receiver has forgotten about the game of football.

Instead, he’d like to take another NFL job. And as we’ve seen a few times in the recent history—some with success and some with not quite as much—sometimes NFL job applicants try to make an impression via Twitter.

That’s exactly what Johnson did when he began sending messages to the Cleveland Browns and head coach Hue Jackson, who was Johnson’s former receivers coach in Cincinnati. Presumably, the 38-year-old Johnson—who, at one point last decade, was one of the best five receivers in the game—isn’t interested in playing, but coaching.

@Browns Can you ask Hue if I can come in & work with the receivers, thanks.

Gonna ask Hue if I can join the Browns coaching staff as a "route running specialist" assistant receiver coach, what's the worse he can say.

I can send my resume (19 hour long DVD) of precise route running & unorthodox releases in man to man. https://t.co/6MZn3r3ovO

I haven't found a job yet & it's been 5 years, I'm bored during the day during what most consider working hours, I should take up knitting.

And you know what? Johnson’s persistence paid off, because this is what he tweeted Tuesday.

What a blessing Hue Jackson is, see y'all in Cleveland on the 28th, no cleats this time just knowledge

Which is all well and good, even though Cleveland.com reports that Johnson will work with the Browns receivers but won’t be there in an official coaching capacity.

Hopefully for Johnson, his newest partnership with Jackson will pan out better than the last time they worked together—when Johnson apparently took a swing at Jackson during halftime of a playoff game.