When Chad Carr was diagnosed with diffuse intrinsic pontine glioma 15 months ago, his story—and his fight against the inoperable pediatric brain cancer—inspired not one college fanbase, but three. And two of the schools happen to be the most bitter of rivals.

Carr was the grandson of former Michigan football coach Lloyd Carr and the son of former Michigan quarterback Jason Carr, but Chad’s battle helped breach the gap between Michigan and Ohio State, especially when the two basketball teams came together earlier this month to decorate his house for Christmas.

On Monday, Carr died, leading all sides to mourn the loss of the five-year-old.

For the past few months, as Chad fought for his life, he became an inspirational story, and after he died, the grief from around the Michigan community was all over the Internet.

Jim Harbaugh on Chad Carr: "It's incredible sadness and I don't know if it's going to get any better any time soon."

…To other Michigan State supporters.

When Michigan and Ohio State continue their football rivalry this Saturday, the sides will honor Chad’s memory. Both teams will wear a decal on their helmets that show the image of a young boy flexing his muscles and the words “ChadToughFDN” to signify the foundation begun by Tammi and Jason Carr that will raise money for research for pediatric brain tumors. 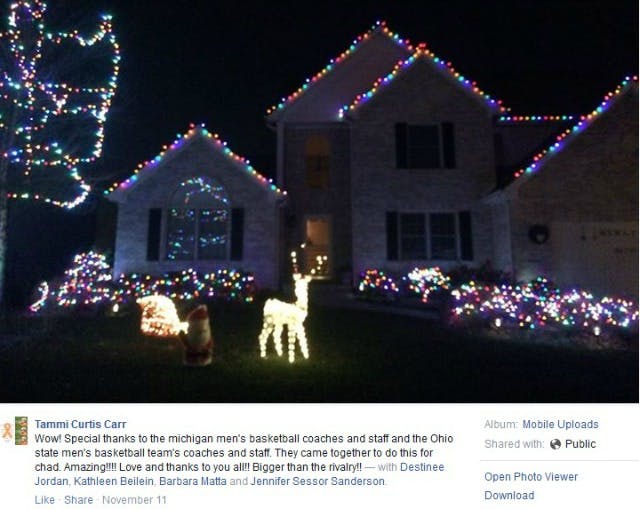 Despite all the support, though, the end was unavoidable. And despite his courage, the sadness about Chad’s death was palpable throughout the Big Ten conference community.