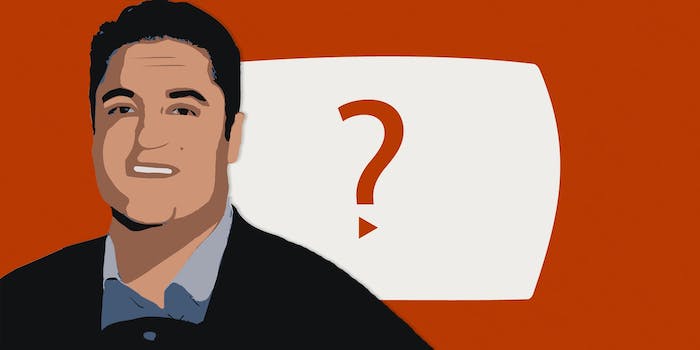 Cenk Uygur is out to change the way you think about and consume nightly news.

The future of news is streaming right now on YouTube. For proof, just reflect back on the recent Navy Yard shooting.

If you turned on any cable news program during the first few nights after Aaron Alexis, a 34-year-old civilian contractor, killed 12 people and injured three more in Washington, D.C., you experienced wall-to-wall coverage of the incident. From CNN’s Anderson Cooper 360 to MSNBC’s The Rachel Maddow Show and Fox News’s Hannity, B-roll footage looped on repeat like an animated GIF, as experts and commentators turned over the minutia of the few details that had come out.

I found myself wondering: Didn’t anything else interesting happen today?

On Young Turks, a two-hour YouTube news show that streams live every weekday at 6pm ET, you certainly would have found plenty of Navy Yard coverage. But you also would have seen host Cenk Uygur, a 43-year-old Turkish American, commenting on everything from Penthouse magazine filing for bankruptcy to the prevalence of fecal matter in Catholic holy water.

Young Turks tackles the news raw, unscripted and unfiltered. Uygur speaks directly to the camera, often alone but occasionally joined by cohosts, riffing off a news event with sarcasm or sometimes anger in manner not unlike Jon Stewart or Stephen Colbert. The show’s resonating with today’s on-the-go youth, a generation that would rather stream Spotify than listen to the radio or watch cable via Amazon Instant. An astounding 65 percent of the shows viewers are under the age of 35. According to Nielsen ratings, the median Fox News watcher is 65, by contrast, and MSNBC and CNN don’t perform much better.

Recently, Young Turks achieved entry into the million-billion club, an unofficial, small group of YouTube channels that have amassed at least a million subscribers and a billion views.

Speaking to Uygur, you’ll detect an anti-establishment resentment against cable news, and it’s not difficult to understand why.

Though it originated as a Sirius Satellite Radio radio show in 2002, the Young Turks launched its YouTube iteration in 2005. In 2010, MSNBC announced that it had hired Uygur as an on-air contributor. Prompted by Keith Olbermann’s abrupt departure and a need to shuffle around its primetime shows, Uygur received his own show in the 6pm timeslot. But though the show at one point beat every other cable news show in the 18 to 34 demographic, MSNBC decided, just five months later, to hand over his timeslot to Al Sharpton.

Uygur was never given a satisfying answer as to why he lost his show, but he has his suspicions. In a video posted to YouTube in 2011, he recounts a time when he was called into the office of MSNBC President Phil Griffin for a talk. “He said, ‘I was just in Washington, and people in Washington are concerned about your tone.’”

Shortly after Uygur left MSNBC he signed on as a host for Current TV, Al Gore’s struggling cable network. Despite comparatively strong ratings, he announced in August that he was parting ways with Current in the wake of its purchase by Al Jazeera, which was planning to convert it into a more traditional, straightforward news source.

Those experiences helped define his approach to broadcast and differentiate him from cable news. While CNN, Fox News, and MSNBC regularly focus on horse race politics, and the 2016 presidential race in particular, the Young Turks host absolutely abhors that type of coverage. “Oh my god, is it Hillary Clinton or Joe Biden?” he said to me, mockingly. “That’s three years from now; you’re wasting people’s time.”

Though Uygur won’t rule out a future in mainstream broadcast media, he has thrown himself completely into building out the fledgling business side of TYT Network, the parent company that includes the Young Turks as well as a number of other shows on entertainment, education, and geek culture.

Three years ago, the company hired Steven Oh, a childhood friend of Uygur’s who played high school football with him and officiated at his wedding, as its chief operating officer.

“He asked me to come on board because the Young Turks had really grown to a point where he couldn’t manage everything himself while at the same time being the talent,” Oh told me.

According to the Los Angeles Times, TYT Network currently has 30 employees and annual revenue of $3 million. The company was among the partners selected for YouTube’s $200 million investment into premium content, and it has also signed up approximately 4,000 subscribers who each pay $10 a month. Much of its revenue comes from subscriptions and ads sold via the YouTube platform.

Oh said, though, that he’s shifting his focus toward securing ad partnerships directly with brands, deals that involve Uygur and other hosts mentioning products and services on the air. Anyone who listens to talk radio would recognize this kind of native advertising, an indication that TYT Network is borrowing from old revenue models rather than simply inventing new ones.

Uygur thinks the advertising revenue has nowhere to go but up. In his view, he was ahead of the game in building up a massive online audience primed to watch this new iteration of news programming. Now it’s just a matter of waiting for the advertisers to catch up.

“Not only are the viewers there, they’re so much more engaged than a TV audience,” he said. “And you know the demographic breakdown of the audience a heck of a lot better.”

Now that he’s focusing all his attention on TYT Network, the company is turning its sights toward expanding beyond YouTube. It recently launched an app for Roku, a device that allows you to stream shows via the Internet onto your television, and it’s in content partnership talks with BlipTV and Hulu.

How will the cable news networks respond? Uygur could care less.

“[In] this day and age, people already have their opinion,” he said. “They don’t need you, the authority figure, to tell them how to think. If you’re like a 71-year-old who watches Bill O’Reilly, you’re still looking for someone to tell you what to say and O’Reilly is the perfect guy to tell you that.