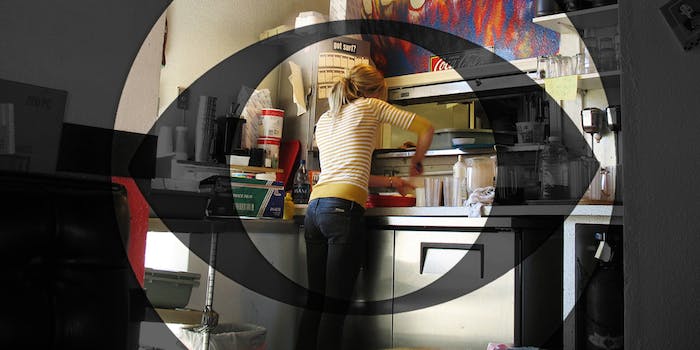 Is not wanting to wear a bikini on television a fireable offense? On 'Undercover Boss' it is.

America: The only country in the world where you can get fired for not coming to work half-naked.

That’s what we learned Sunday night on Undercover Boss, the CBS reality series where bosses and executives go undercover to suss out bad employee behavior. This week, the TV show focused on Bikinis Sports Bar & Grill, an eating establishment that CEO Doug Guller loving refers to as a “breastaurant.”

In the episode, which you can watch here, Guller fires a woman for refusing to wear a bikini top on camera. To clarify, she was willing to take her top off during work hours, as it is part of her job description; she just wasn’t OK with showing her boobs on national television.

The low point of the scene—but probably the high point, from a CBS reality TV producer perspective—is when the employee, Jessica, starts crying. To console her, Guller offers to help her find work by getting “[her] resume out there.” Which sounds like a magnanimous offer, until you consider that Jessica works at a breastaurant, so in this case “resume” is may just be a synonym for “bikini photos.”

Naturally, the Internet wasn’t too happy with Undercover Boss, taking umbrage with Guller’s unbelievably sexist behavior. (As an aside, you can check out a list of the businesses he owns here.) Viewers also took CBS to task for airing the episode in the first place:

I'm still upset by last night's episode of #undercoverboss!! #CBS should be ashamed for airing such filth! #dougguller is a pig!

#UndercoverBoss @CBS two thumbs up for supporting the firing of a girl respecting herself on national TV, another huge step back for women

Undercover Boss last night was disgusting and sexist and the CEO needs to learn to respect women.

@CBS CBS totally off my TV after super gross #undercover boss. Degrading women is apparently now ok on CBS. Have u no shame?

This is #America 2014:bosses who offer waittresses in bikini tops breast implants 4 free if they work harder https://t.co/B0dZUyjSWZ

But let’s be honest, guys: We’re talking about a show where high-level white dudes wear fake glasses and Groucho Marx mustaches so they can spy on their employees and then fire them on air. Giving a platform to a sexist asshole who thinks employees should be judged solely by their cup size is bad, but has CBS really had any shame to begin with?