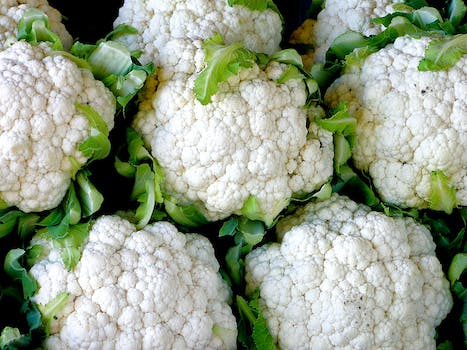 10 YouTube recipes for optimizing the year of the cauliflower

Cauliflower is the breakout vegetable of 2015—no, really.

According to the epicurean calendar, 2015 is the year of the cauliflower.

As many food pundits are proclaiming, the new slogan for the next 360-plus days is goodbye kale, hello brassica oleracea (a.k.a. cauliflower). Take those bitter green leafs and toss them in the compost heap; head to the farmer’s market and stock up on multicolored heads of this kale cousin that is far more versatile than most cooks imagine.

Did you know that when you grind up, pulverize, or process raw or cooked cauliflower that the result is called rice? And those firm leaves that come with heads of this sulfur-rich vegetables are incredibly edible? Hang in there—we have the video to prove it.

Whether you are a long-time cauliflower lover, a recent convert, or someone who just wants to be on the 2015 foodie bandwagon, there is a recipe for you. Thanks to some YouTube curation, we offer 10 ways to celebrate the vegetable, called by some, one of the world’s healthiest.

Yes, you can add buffalo sauce to pretty much anything and make it palatable. The famous spicy-hot sauce made famous by Buffalo’s Anchor Bar, is put to the test in this preparation of baked cauliflower later doused in a vegan-friendly red sauce. Come halftime, will your football fan friends enjoy this as much as a pretzel-crusted pizza? With enough seasonal beer, it might just do the trick come Super Bowl Sunday.

If your stove is on the fritz or you just enjoy giving your chompers a workout, raw food could be the way to go. Looking at cauliflower, the thought of eating it without steaming, baking, microwaving, or flash frying could be daunting. But this couscous recipe uses a food processor to reduce the white veggie into a rice-like texture. Adding carrots, cherry tomatoes, chopped parsley, and some good olive oil yields an appetizing salad that is perfect for those on gluten-free or vegan diets.

Add meat to any cauliflower dish transforms it from veggie delight to paleo staple. While this clip spends a bit too much time promoting a paleo cookbook, it does lay out the simple way to make a fried rice (that’s processed cauliflower in case you aren’t following along) that adds in meat and veggies to make it perfect for those who are followers of the caveman diet. In this clip, Jaden Hair uses bacon as the meat ingredient, but any sort of animal product would do.

Waste Not, Want Not

As previously mentioned, it would be a pity to throw out those nasty-looking green leaves that seemingly hold the cauliflower heads in place. Aside from the fact they likely will wreck your garbage disposal, they have the same nutrients as the core of vegetable. The preparation used by AlkalineAnthea—using onions and garlic as a layer on top of the stalks—actually works well using other greens or stalks such as beet greens, kale, chard, or mustard greens.

Foodies who consider themselves healthy eaters vacillate on the issue of eating fried foods. In the case of this recipe for cauliflower fritters, you could argue that the benefits of eating this healthy vegetable far outweighs any negative that comes from cooking in hot oil. Honestly, the “everything in moderation” principle applies here; the occasional sumptuous-looking (and tasting) vegetable fritter prepared using a healthy oil (let’s not start a debate here) will not set your diet back. My larger issue in this recipe is the use of a packaged dried salad dressing mix when those same ingredients (salt, pepper, etc.) in natural form are easy enough to find.

To keep us healthy, I often marvel at the ingredients (dried mushrooms, for example) my wife will use to make a dough that contains as little regular flour as possible. While she has never gone to the extreme of using a fresh head of cauliflower to create the ultimate healthy pizza crust, this clip will go through the details of making this funky-looking but savory bread-like substance. While the video is thorough in its detailed instructions, we could do without the corny humor.

Who could argue with this logic: if your tortilla shell/wrapper is gluten free and void of flour, you can load the innards with bacon, cheese, and all sorts of greasy goodness. Even if that premise doesn’t work, this video recipe for creating a cauliflower-based Mexican-food shell offers some interesting ideas that can be modified for different tastes. Again, instead of using packaged taco seasoning (as suggested here), you might want to use the mix courtesy of Alton Brown (of Food Network fame).

Those of us who are diehard diners of Indian cuisine know that cauliflower is a popular ingredient in a number of dishes such as aloo gobi. Aloo gobi is a spicy dish that marries potatoes with the veggie du jour along with a number of piquant spices. As someone who has made his fair share of Indian dishes at home, the beauty of the recipes is that they allow for a fair amount of experimentation. There’s no end to the amount of heat you can bring to Indian food and, in many cases, vegetables are somewhat interchangeable. If, for some unknown reason, your local grocer is out of cauliflower, you can use broccoli or even string beans as a substitute.

Pickles are in. From traditional cucumber-based pickles (the kind you find on the Lower East Side) to fermented celery, beets, radishes, squash, and all things in-between, novice home cooks are trying their hands at pickling. Indian pickles are a breed unto themselves as they employ such amazing spices as cumin, fenugreek, mustard seeds, and mustard oil. The recipes, such as the one here for pickled cauliflower and turnips, follow some of the same steps as other fermented morsels, but the twists—such as heating the veggies in oil and spices—yield some unexpectedly delicious flavors

In the cyclical diet-go-round, the Mediterranean Diet was once considered the ultimate eating style for maintaining a healthy heart. Rich in vegetables and olive oil, replicating the way folks in Greece, Crete, and other parts of Southern Europe dine is still followed by millions. This recipe using salt, herbs, and olive oil that is pure gold is simple yet the perfect accompaniment to any main course. Aside from some wonderfully aromatic components—such as fresh rosemary—the technique displayed by Diane Kochilas is a great tutorial for novice chefs. Kochilas, who runs a cooking school in Greece, has a way of slicing garlic that makes it almost liquify while cooking.

In case you are wondering what other trends are in store for 2015, the foodie calendar shows matcha tea, seaweed, foraged greens, and the continued craze for the use of probiotics (fermentation) in cooking. Fear not, it’s not all healthy stuff—according to the Washingtonian, happy hour fried chicken skins and white chocolate deserts are trendy.

To all of that, we say, bon appetit.