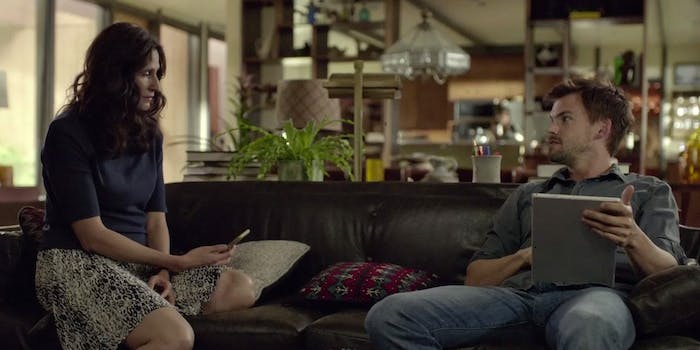 New Hulu comedy Casual is bookended with church scenes, one a death and one a marriage. By the end of the series, you’ll wonder if Al Bundy was right: Are they the same thing?

Directed by Jason Reitman (Juno, Young Adult) and created and written by Zander Lehmann, Casual is an exploration of our digital and inner selves. The great Michaela Watkins, who’s had bit roles in Wet Hot American Summer and Married, plays Val, a harried therapist who’s attempting to navigate life after a divorce. She and her 16-year-old daughter Laura, played by Tara Lynne Barr (God Bless America), move in with Val’s brother Alex (Tommy Dewey), the co-founder of a dating site called Snooger. He lands dates with women because he’s rigged the algorithm—something he has no problem telling them.

Watkins has a quiet humor, and she uses it to great effect in Casual (“I don’t know what’s underneath there,” she nearly whispers to her daughter, after she’s caught trying to self-wax).  But she also makes us feel something: We see her struggle with dating again, with raising (and relating to) her mercurial, sexually liberated daughter, who’s developed a crush on a photography teacher. Val can’t help but psychoanalyze her own life and project her pain onto patients. As she begins dating, she struggles to understand the subtext of ellipses in texts from her 23-year-old hookup.

But it’s hard to feel sympathy for Alex, who’s drawn into the overdone tech-bro bachelor stereotype. He fears commitment, and he dicks over a bartender/blogger who fell into bed with him after he revealed the smoke and mirrors of online dating, revealing how surprised he is about the tryst because she’s not his type and has a great “personality.” OK, he’s a dick—what else?

His character in particular could cause people to lose interest, especially within Hulu’s weekly release schedule, but halfway through, we do get more color in his sketch and see why he’s so terrified to connect, even as he created a channel for just that. Ah, love in the time of Internet.

The show could have been more interesting if the plot centered on Val and Laura’s relationship a bit more and Alex was just a subplot—a channel into her new dating life.

Reitman wrote and directed the first two episodes, and we definitely get the hallmarks of his films: wise-beyond-her-years teen, delusional adults, white, middle class. Creator Lehmann says he waited five months after Reitman’s Men, Women & Children—another read on family, relationships, and the Internet—came out to approach his “dream director” about the series.

Hulu’s jump into original comedies has so far yielded one hit: Difficult People, which got picked up for season 2. That show focused on the narcissism that bonds two friends together, and by the last few episodes, we do feel something for these people. Val and Alex don’t have that same spark; their bond feels a little more like Jimmy and Gretchen’s from FX’s sleeper hit You’re the Worst, with the misanthropic chemistry stripped away.

And yes, that’s a little weird because they’re siblings, not lovers. Val and Alex’s relationship seems a little off at first, but once we get to know their family dynamic and see the blinding narcissism of their parents (played by Frances Conroy and Fred Melamed)—and realize that Val was probably Alex’s de facto mother—things come into focus a bit more.

Lehmann says he has a very close relationship with his own sister, and he was living with her when he wrote the show, though their relationship isn’t quite like Val and Alex’s: “They get each other in a way that no else does.” He also admits that he hadn’t done online dating before the show, but tried out apps like Tinder while he was writing. “Ultimately, I liked it,” he said. “The ease was kind of incredible. … [I] liked the idea of a person who was dating to hide something deeper.”

Sex is a major part of Casual, and everyone’s having it. Laura is open about her sexuality. Val is not. And while sometimes the deception plots get a little heavy-handed, Casual does well to highlight the parallels between the mom-daughter experience of navigating sex. The are claims that online dating has made us flaky, unwilling to commit, too casual. But Casual highlights something better: how rigged the online dating game is for 35-year-old men, though not so much for 39-year-old women.

“I feel like we’ve all been flakier since cellphones,” Lehmann said. “Now you make a plan, then you just bail. That’s becoming an accepted practice. There’s something comforting about, ‘I can do whatever I want.’ … They get it because they do the same thing. … We were already on that path.”

For Reitman’s first TV foray, there are certainly the desperate, funny moments that made Young Adult such a peek-through-your-fingers watch. (Wendy Rene’s “After Laughter” really is the perfect song to close each episode.) Watkins elevates it though, showing us a woman who’s had to shed the skin of her old life but hasn’t figured out the new one. “I don’t know what’s wrong with me,” she says in a later episode. It takes a while to get there, but there are some are some rewarding moments along the way.