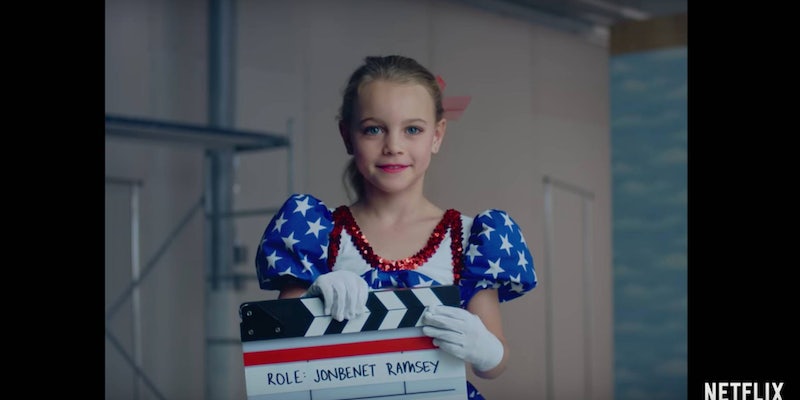 ‘Casting JonBenet’ is a bizarre, compelling look at an unsolved mystery that still haunts us

Her death is a scab we can’t stop picking at, and the Netflix doc exploits our obsession.

It’s been over two decades since 6-year-old child beauty queen JonBenet Ramsey was found murdered in her family’s home in Boulder, Colorado. The events of that Christmas night in 1996 are still surrounded by mysteries, conspiracy theories, and questions that may never be satisfactorily answered. Netflix’s new original documentary, Casting JonBenet, doesn’t offer any definitive answers, but neither does it try to. Instead, it takes a novel approach to examining the impact of the event on the people who live where it unfolded, even all these years later.

Anyone who jumps into Casting JonBenet without knowing about the underlying concept will likely become very confused, very quickly. Rather than a straightforward approach used in countless crime documentaries before, Casting JonBenet examines the murder through the eyes of actors and actresses auditioning to play the various real-life personalities in an adaptation. Writer-director Kitty Green introduces viewers to dozens of local Colorado actors, all dressed in identical outfits and ready to try and win the role of John and Patsy Ramsey. While we see some of these actual auditions, or their participation in dramatic recreations of the real-life events, most of the film is occupied by interviews where these actors discuss their recollections of the murders, their theories as to what happened, and occasionally their surprising personal connections to the events.

It’s a bold narrative choice, and one that can be disorienting and surreal, even if you know what you’re going into from the start. But once you get past the initial confusion, Casting JonBenet becomes way more interesting than just another crime documentary disinterring old bones and finding no new definitive solutions. The death of JonBenet Ramsey has become, like the Jack the Ripper killings or the assassination of John F. Kennedy, one of those unifying events that fascinates and obsesses people precisely because there are no answers—or at least no satisfying ones. These actors are having the same arguments, positing the same theories, feeling the same visceral reactions to a child’s brutal murder that we, as a society, have been working over for 20 years. JonBenet’s death is a scab we can’t stop picking at, and probably never will, unless the case is eventually, definitively closed.

Part of that is because of the sheer number of truly bizarre elements involved in the case: The parents’ unhinged actions throughout the investigation. The police’s apparent mishandling of the case. The three-page ransom note, written inside the house with one of the Ramseys’ own pens and note pads, and the oddly specific ransom demands. The false confession by John Mark Karr. It’s no wonder this case still puzzles and infuriates people all these years later, and it’s fascinating to watch Casting JonBenet’s lineup of actors seize on different theories or elements that most intrigue them. All the more so to see the way the case brings out their own most personal and intimate stories, from personal loss to the darkly comical moment when an actor/sex educator dressed like a cop begins demonstrating proper flogger use and then lecturing on ligature marks.

Casting JonBenet is a weird, ungainly beast that, on first glance, almost certainly shouldn’t work as well as it does. But it works not so much as an insight into the unsolved mystery of JonBenet Ramsey, but rather as a spotlight on the ways in which we as people can connect with and empathize with these high-profile tragedies.

Toward the end of the film, director Kitty Green begins staging sequences in a mock-up of the Ramsey home. Dozens of these actors populate the soundstage, all acting out different moments of the Ramseys’ grief, loss, confusion, and anger. Some are imagining John as the killer, or Patsy, or both as innocents. There are no answers in Casting JonBenet’s tapestry of loss, but that makes it no less compelling.