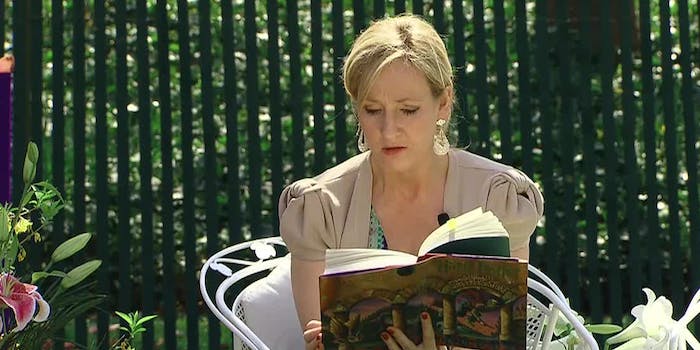 Casting for new J.K. Rowling adaptation will include actor who played Dumbledore

Well there will be at least one familiar face there.

The first Harry Potter spinoff movie won’t be out until 2016, but that doesn’t mean J.K. Rowling fans will be bereft of new entertainment until then.

A TV adaptation of Rowling’s adult novel The Casual Vacancy is in the works, co-produced by HBO and the BBC. The first members of the cast have just been announced, and among them is Michael Gambon, the actor who played Dumbledore in the later Potter movies.

Gambon’s role in The Casual Vacancy will be more Dursley than Dumbledore, however. The book is about political and social conflicts in a small English town, beginning after a local politician dies and leaves a seat open in the parish council. Gambon is set to play the unpleasant local council leader Howard Mollison, with Penny Dreadful star and recent Olivier Award-winner Rory Kinnear in the role of the deceased Barry Fairbrother.

Several of the other cast members will be well known to British audiences, particularly Keeley Hawes (Spooks; Upstairs, Downstairs) and Monica Dolan. One of the most important characters in the book, Krystal Weedon, will be played by a total newcomer, Abigail Lawrie.

The Casual Vacancy received mixed reviews, particularly from Harry Potter fans who were dissatisfied by the novel’s total departure in tone from Rowling’s previous work. Rowling’s other adult novel, crime thriller The Cuckoo’s Calling, had a far more positive reception. Written under the pseudonym Robert Galbraith, it will soon be followed by a sequel titled The Silkworm, although unlike The Casual Vacancy there is no sign that it’s being adapted for film or TV.