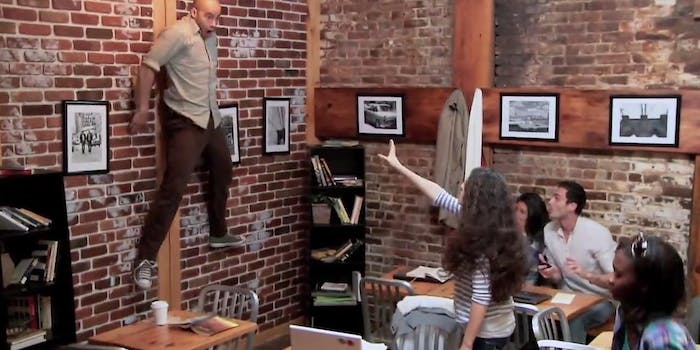 Woman with telekinetic powers freaks out on unsuspecting café patrons

Don't mess with a gal and her laptop.

Who needs caffeine when you can start your day with a little telekinetic mayhem?

This is what a few allegedly unsuspecting customers received one morning when they were ordering their morning coffee at a New York City cafe. As part of an elaborate promotion for the upcoming remake of Carrie, a woman sitting by herself begins to freak out after accidentally spilling coffee on her laptop (pay attention to the woman’s reaction at about 1:47, it’s priceless).

The video has been seen 3.7 million times since Monday.

“One of these days, somebody’s going to get shot by a trigger happy customer who decides they have a right to self defend against some crazy telekinetic powers,” banjo_07 commented on Reddit.

“Fake viral video or not…that was one of the best ‘prank’ setups and executions I have seen in a long time, really well done,” prsmike added.