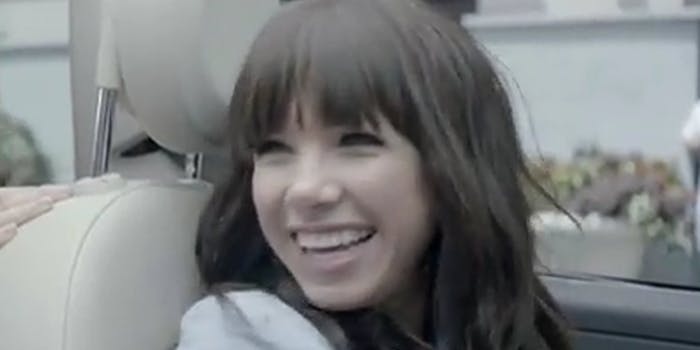 And judging from the video for "Good Time," the YouTube pop star isn't particularly good at camping, either.

In it the two, along with a dozen of their closest Urban Outfitter model friends, frolick in a mosquito-infested forest. The video starts with Jepsen sitting on Fiat and smiling (presumably because she just forced Jennifer Lopez’s tenure of Fiat queen to an end). Doing an impressive job of squeezing out of a tight parking space, Jepsen and company roll out to the Catskills to meet up with Young’s crew.

From there, we learn that Jepsen can’t work a slushie machine, the cool gang forgets to close the roofs on the cars even though it looks like it’s going to rain, and their wardrobes are not camping ready.

Not a whole lot happens after that. Jepsen and Young walk around like they’re coming off a sugar high and judging by their supplies, they’re terrible campers. It takes two minutes to read eHow’s How to Pack for a Camping Trip list, you guys. Young didn’t bring a change of clothes and Jepsen’s denim ensemble is going to smell wretched once it gets wet.

The video concludes with the cool, diverse gang dancing in a forest. It doesn’t look like they brought speakers, so that explains why they’re all off rhythm. We’re also left with the uneasy feeling that the campfire wasn’t put out properly, given that they can’t work a slushie machine.

Then, OMG you guys, it looks like Jepsen and Young are going to kiss. Jepsen grabs his shoulder but Young is like “gahhhh” and pulls away because the only thing that man knows how to touch is a keyboard. Maybe they make out in the tent later? I don’t know, she can do better. He can’t.

The video has racked up 14,000 views since its release Tuesday morning and serves as a solid tutorial on how not to pack for a camping trip.