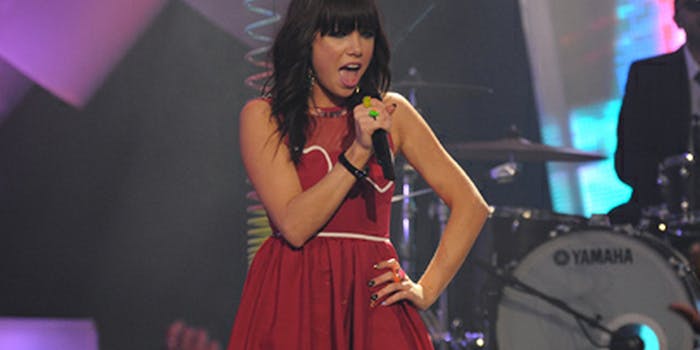 The Canadian singer teamed up with Owl City for a new single, "Good Time."

Carly Rae Jepsen has had enough of waiting for your call. Now she just wants to have a good time.

If you know of Owl City (best known for the 2009 hit “Fireflies“), then you know what to expect in this new song: upbeat lyrics laid on top of bouncy, electronic beats. The three-minute song has already racked up 65,000 views on YouTube in one day.

Comments on the YouTube page seemed to be more excited for the reappearance of Owl City than they are for Jepsen. Also: a lot of debate how “mainstream” the new single is with one commenter surrendering “mainstream-ness aside, I love this song.” Someone has a case of Jepsen fever!

For the majority of the song, its Jepsen singing “woah uh woah” with Owl City’s Adam Young exclaiming “it’s always a good time.” It feels like a perfect song for a cruise commercial or a promotional reel for the CW, where sexy, young celebrities bounce around and smile seductively at you because they’re having a good time. But that’s alright, because we’re also having a good time!

Jepsen, whose song breakout song just hit 120 million views on YouTube, was smart enough to join an established band for her second hit to help propel her fame. It’s not entirely fair to compare her to another YouTube-popular singer, Rebecca Black, because Jepsen actually has a voice, but poor Black keeps trying to follow up her accidental hit, “Friday,” without gaining any traction.

Anyway, it might be time to put down the phone and turn up Jepsen’s new song. We’re already preparing for her world tour.