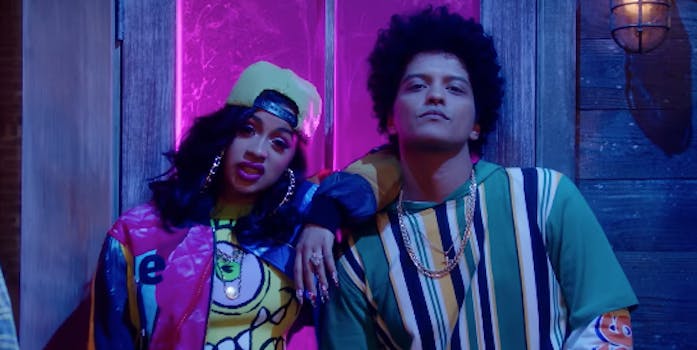 The pair pay tribute to 'In Living Color.'

A mere 24 hours after breaking a chart record with three Hot 100 hits in the top 10 simultaneously—a feat previously only accomplished by two other artists, the Beatles and Ashanti—Cardi B has teamed up with labelmate Bruno Mars for a remix of his song “Finesse.”

The song dropped at midnight Thursday after both artists teased the single on social media. What they hadn’t let fans know, though, was that a music video would be dropping too.

Cardi’s verse starts off the track with a throwback flow that seems like just as much of a nod to the Fresh Prince of Bel-Air intro as it does to songs like Sugar Hill Gang’s “Rapper’s Delight.” Both stars are decked out in head-to-toe early ’90s gear, and a dedication at the end of the video clues you in on the inspiration: sketch comedy show In Living Color.

Mars tweeted Wednesday evening that it was one of his “favorite TV shows of all time.”

With “No Limit,” “MotorSport,” and “Bodak Yellow” all in the top 10, and her newest solo single “Bartier Cardi” debuting this week at the No. 14 spot, it’s safe to say that January 2018 is going to be the month of Cardi B singles.