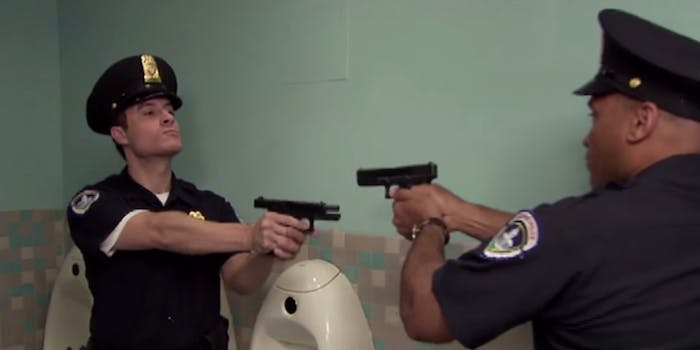 It's much harder than it looks.

The Capitol Police, which protects some of the most important buildings in Washington, D.C., is finally doing something about its police officers leaving their guns in Capitol bathrooms.

Does it seem like a no-brainer that you don’t need to whip it out when you whip it out? Of course it does. But the police now have to watch a special video about what to do with your gun when you go to the bathroom. Amazingly, Jimmy Kimmel got his hands on the “video.”

While it doesn’t cover what female officers have to do when they use the restrooms, the “potty training” does hit most of the basics for men. Taking it out, that’s easy. Putting it back is the real problem, and while they may have a ways to go in terms of putting the gun in its case, at least they have the other thing figured out.