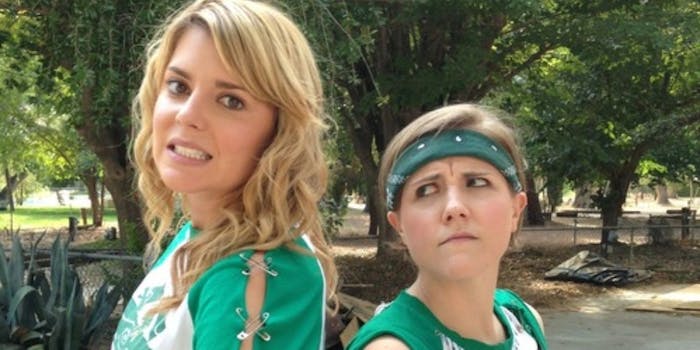 Don't have a date for Valentine's Day this year? Well now you have three.

The trio’s first feature film, Camp Takota, finally has a release date so grab your sweetheart and sit down for a Valentine’s Day viewing.

Camp Takota, about a hapless woman (Helbig) who goes back to her all girls summer camp as a counselor and teams up with childhood friends (Hart and Hart) to prevent an evil man from buying the camp and turning it into a Digital Interactive Camp.

The movie, written in part by Mamrie Hart and based on her time as a camp counselor, will be released on the Internet for download on Feb. 14, 2014 and stars three of the web’s biggest celebrities—so while some will be out with their partners celebrating love, probably many more will be inside curled up ready to watch three funny ladies at their funniest.

Fans will be able to purchase a DRM-free download of Camp Takota on Valentine’s Day via VHX at CampTakota.com for $9.99. They can also spend up to $300 on “Care Packages,” which include a download of the flick plus limited-edition extras like Camp Takota T-shirts, handmade friendship bracelets, private cast and crew Google Hangouts, cast-recorded personalized voicemail messages, custom videos, and more.

And in the meantime, gear up by reading the Daily Dot’s interviews with the ladies on the set of Camp Takota this summer.