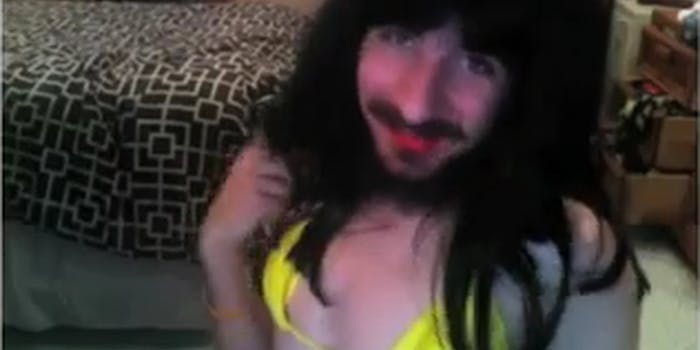 YouTube prankster Steve Kardynal brings the laughs by performing the song of the summer on ChatRoulette.

If you were wondering what type of reactions you’ll get when you sing “Call Me Maybe” on ChatRoulette, we have have the scientific answer: It’s either confused, amused, or enthused to sing along.

That’s what YouTube prankster Steve Kardynal found out when he sang the Carly Rae Jepsen hit to unsuspecting ChatRoulette users and posted the results to YouTube. The three minute video, uploaded Friday, is stuck at 301 views—meaning that viewers are not yet sick of “Call Me Maybe” mashups.

Dressed in tight bikinis or a glittery top, Kardynal discovers his feminine side while crooning the song of the summer for ChatRoulette users. The majority of reactions are pretty cool, except for the guy at 2:22 who was not amused that Kardynal took off his bikini top.

The video shot to the top of Reddit’s popular r/videos subreddit, and redditors had their hearts warmed by how ChatRoulette users enjoyed Kardynal’s rendition.

“Some of the smiles and bursts of laughter on the left were so fucking genuine and awesome, made my day,” wrote Reddit user balanceiskey.

Another user wrote “we need more people spreading laughter like this.”

Perhaps the most surprising part of this story is that people are still using ChatRoulette. With people like Kardynal serenading audiences, the site might be worth another try.