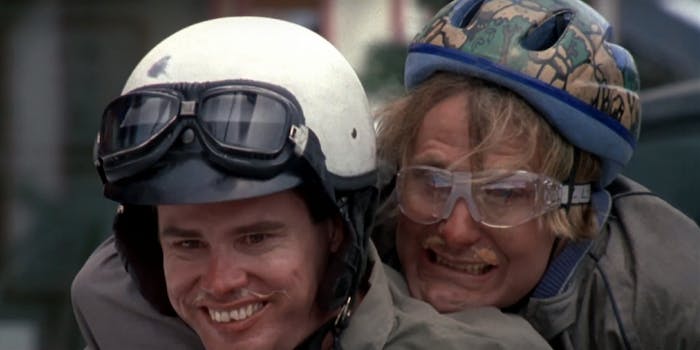 Just say you got it from a kid back in town.

If you’ve had dreams of driving the original mini-bike from Dumber and Dumber around town, it can be yours for entirely too much money.

A Houston-based seller has put the mini-bike from the 1994 Jim Carrey-Jeff Daniels comedy on eBay, where, as of Tuesday morning, it’s going for more than $34,000. That’s a significant increase from just three days ago, when it was at $9,600. Looking at the bid history, it appears there was a cancelled bid for $10 million (!).

According to the description, it’s one of two original bikes from the film and was acquired directly from the film’s transportation coordinator, Gordie Merrick. The seller “spent a little over a year slowly restoring it back to original condition.” The bike is “in good running order now, but has not been ridden.” So maybe don’t take it to Aspen right away.

This might actually be the perfect time to sell since Dumb and Dumber seems to have infiltrated the Winter Olympics.

Those USA gloves are straight out of Dumb and Dumber #openingceremony pic.twitter.com/ZxEyaIza49