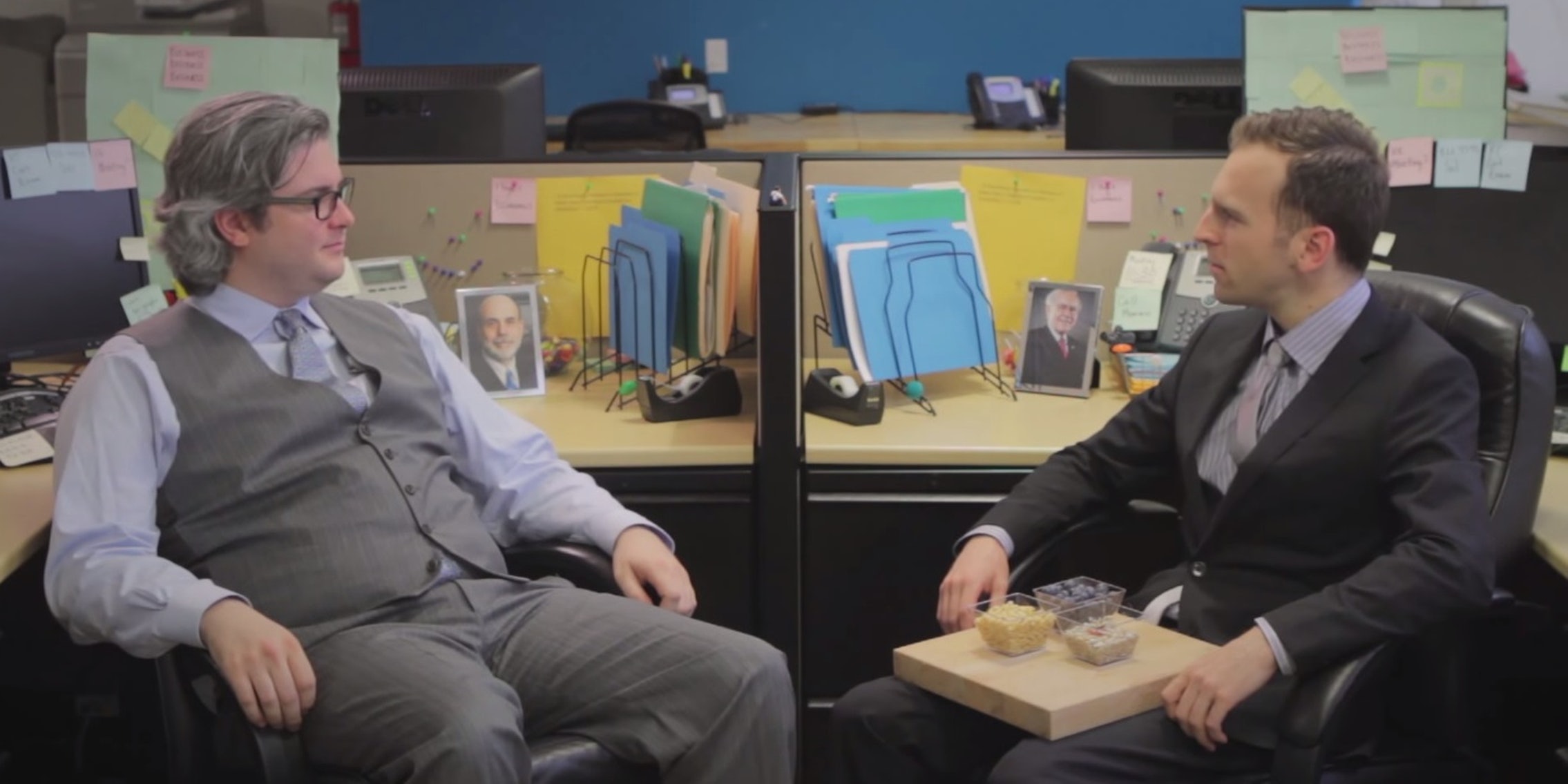 Let me tell you the secret to business.

Business-speak and those who sup the corporate Kool-Aid are intolerable. But they exist in the corners and cubicles of offices worldwide, and their antics are finally seeing appropriately comedic treatment in new webseries Business Time.

One day when worked in a giant skyscraper in the city, I remember watching two besuited men leaving the elevator, one old and one young, deep in conversation.

The older one—who indicated with his blustering body language that he considered himself some sort of financial sensei—was uploading some of his acumen into his acolyte: “Now you listen to me, young man,” ordered Buffet-lite as he shifted his briefcase from his right to left hand so as to allow him to put his arm around the other’s shoulder, “There’s one secret to business, and it’s this…”

To my eternal shame, it was at this crucial point that my eavesdropping stopped, as I had to take their lift up to the 26th floor. But it didn’t really matter. If there is one secret to business, it is unlikely that some nobody trying to impress kids would know it.

Yet he did have one thing that I didn’t. It isn’t particularly rare—it is something you will see in certain people if you ever have the misfortune of working in an office—but it might be advantageous. You could see it in his mannerisms, how his eyes shone as he looked at his protégé, in the way he had willingly become ensconced within the language and essence of commerce.

In short, you could see that he loved business. Goddamn, he loved business. Talking about deals, offering advice, making moves. I bet there were dog-eared copies of Who Moved My Cheese? and CliffsNotes of The Prince in that briefcase. I’m not even sure he was that interested in money. But generic business? That was his jam. And this is the type of person that the comedy webseries Business Time is about.

Gene (creator Alex Herrald) and Gene (Curran Connor) are of this ilk; two cubicalized 40-somethings trapped exactly where they want to be—in some sort of odd vortex of an office (like a display home for partitioning) where nothing gets achieved other than the musing about how things could or should theoretically be done.

And while Business Time is comedic, it is right on point. An environment where people spend as much time creating illusions perpetuating the necessity of their employment as actually working is one where business-speak, interminable HR meetings, and team “fun” days flourish. Do plumbers have to do this stuff? Of course not. But show up at a workplace where you realize on day one that your degree is worthless and your computer is doing everything anyway, and most of day two will be dealing with the person in charge of proper workplace set-up and desk posture.

The lazy touchstone for the series—which surprisingly filmed almost all of its seven episodes in one day—is Tim & Eric, the go-to comparison for any comedy that cannot immediately be categorized. But whereas T&E is a cavalcade of nonsense impossibly held together by some sort of divine, intangible genius, Business Time is well-rooted in reality, underpinned by characterizations that (although amplified to the nth degree) are grounded in reality.

And it’s this realness that appeals. The very idea that someone finds their involvement in the systems and frameworks of some humdrum business not just rewarding but worthwhile in the broadest sense is as humorous as it is worrying. But it can also interestingly inspire envy in those who cannot find enjoyment in something so mundane.

People like Gene and Gene really exist, and you may wonder where they come from. But they are always around; it’s just the workplace is probably the first time in your life that you’ll ever have to interact daily with people whom you haven’t chosen personally: Consider the middle-management type who had introduced an edict that if somebody had a good suggestion in a meeting they were to be rewarded with a standing ovation. Of course, realizing the brilliance of his own idea, he rose to his feet so as to applaud himself.