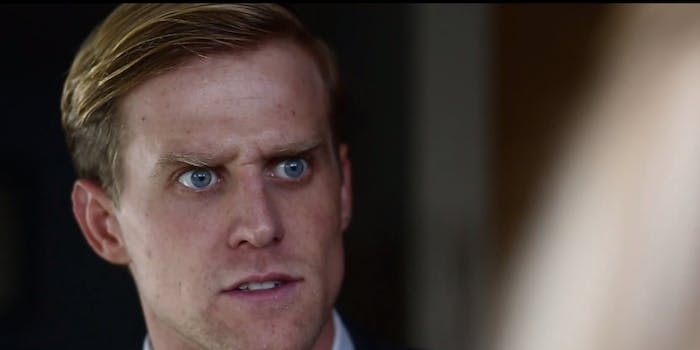 Frank Drebin fans, he of the puntastic Naked Gun series, will find a new object of affection in the form of Burt Paxton, Private Detective—a clever and hilarious new webseries.

Actor/comedian Burt Grinstead stars as Paxton, an inept L.A. detective who lives in a world that comically mashes up film noir sensibilities with witty dialog of the “don’t call me Shirley” genre. The idea for the series, Grinstead tells the Daily Dot, is a proof point for a concept he and writer/director Aaron Fradkin hope to some day turn into a feature-length film.

“I love film-noirs. Aaron loves smart comedies,” Grinstead said. “We both love sophisticated jokes disguised as low-brow humor. We decided we should collaborate on a project that combined everything aforementioned.”

A nosey reporter knocks on Paxton’s door in search of a lead on a headline-grabbing case of missing felines.

Reporter: Detective Paxton, may I have a word?

Paxton: What are you looking for—a verb, a noun, an adjective?

The more serious genesis of Burt Paxton came when he and Fradkin were crafting a skit that was geared to showcase an actor’s ability to take on a wide range of emotions. After workshopping some ideas, the idea of a bumbling detective was born which led to a short film  that the duo produced on Fradkin’s new video equipment.

With the help of comedy writer Steve D’Amico, a pilot episode was created and Burt Paxton’s character took on a life of his own. “We filmed the first episode and again realized we had something worthwhile,” Grimstead added. “More importantly, we each had the time of our lives discovering what we could and could not do with this character, in this world.”

There is a lot of trial and error in the first four episodes of Burt Paxton with an improving sense of rhythm and style apparent as your progress through the initial four episodes. The most recent clip, “Burt Paxton and the Missing Ring” finds the detective in search of his mother’s missing wedding ring. The episode features Allan Wasserman (of Arrested Development fame) as his incredulous father who is totally unaware his wife is a hitman for the mafia. The dialog and sight gags are fast-paced and smart.

As with other writers, directors, and actors, the hope is that YouTube becomes a showcase that will attract money, sponsors, and continued positive reviews. “We also have a feature-length script centered around Burt Paxton,” Grinstead added, ”and we could even see this as a half-hour episodic. Aaron and Steve have an amazing handle on this style of comedy and continue to create hilarious and original material, and I enjoy moving my eyebrows to the tune of this character.”