A cryptic email promised a major music scoop—but it may just be a hoax.

As an occasional music writer, my inbox is flooded daily with review copies of forthcoming albums, concert announcements, and meek introductions from unknown solo artists. Most of these emails land unopened in the trash, since I only have time to listen to about 2 percent of what I receive. But this week, something odd avoided my merciless filters, giving me pause.

The message was from “John,” and the subject line read: “unreleased burial.”

Burial is the stage name used by London’s William Emmanuel Bevan, a master of ghostly, cerebral dubstep. Whoever sent the email appeared to have done his research—Bevan has produced some of my favorite tracks from the past decade, honing his formidable talent in the process. Considered a recluse by the music press, he recently posted a surprising selfie and promised to follow up his recent EP, Rival Dealer, with additional tunes in 2014. 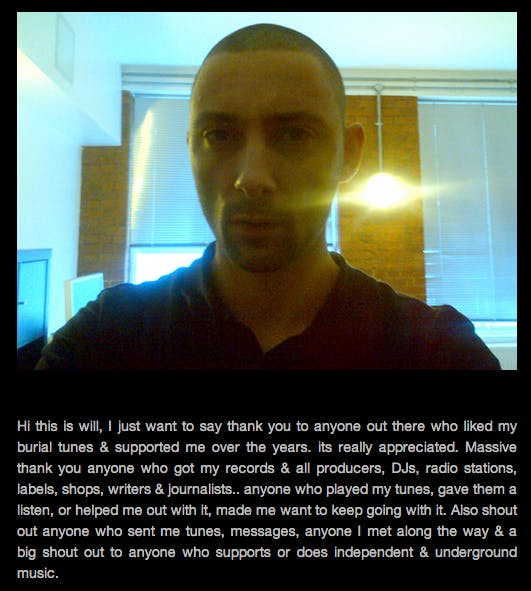 Since the mystique around Burial has resulted in several Internet hoaxes, Pitchfork felt compelled to note that the photo and message were confirmed as authentic by Bevan’s longtime record label, Hyperdub. So it was heavy skepticism that I opened the curious note from John, which bore an attachment and this brief explanation:

“hey. i stumbled upon this unreleased burial tune on a flash drive a few days back and i thought you would enjoy. cheers.”

The signature read “anonymous source,” and the email itself derived from [email protected], an address that apparently belonged to “John Smith,” which had to be a pseudonym.

The file he offered set off all sorts of alarm bells: “burial_wastedyouth_v6_nomaster.wav,” Google helpfully informed me, could not be virus-scanned. And what was this nonsense about discovering a deeply coveted piece of music on some random flash drive? I had never heard of a hacker trying to socially engineer the downloading of malware via the victim’s love for a niche electronica artist, but that’s what this appeared to be. I told John there was no way I’d bite.

His reply seemed calculated to exploit my sense of self-doubt: “your loss,” he wrote.

I still wasn’t going to take the chance that some distant stranger knew exactly how much I loved Burial and thought to send a bootleg song of his to me in particular. But he’d gotten the better of my curiosity. I started pressing him on his story.

“I’m just trying to understand,” I wrote. “You found a flash drive and it had an unreleased Burial song on it?” All John would say was “yes.” When I expressed my security concerns, he simply contradicted me: “it is not a virus.”

Not terribly persuasive. But after some cajoling, John uploaded the questionable .wav file to YouTube. I clicked his legitimate link, feeling much safer, and listened to a perplexing five minutes of audio. The dry, spare instrumentals and disembodied voices certainly matched Burial’s 2007-era palette. Plus, Bevan had just said that he’d soon put out some leftovers: “I want to go and find some old tunes I did that still sound alright and never came out,” he’d told his listeners. “It would be nice to finally put some of them out on vinyl one day.”

Nonetheless, something felt off. “Wasted Youth” never cohered or took some surprising twist, as Burial’s tracks tend to. It felt more like pastiche, or even parody, a cobbling together of some familiar sonic signifiers to create a fake original, like the counterfeit masterpieces painted by Wyatt Gwyon in The Recognitions. It coasted along on wobbly snares and snaps, failing to hold one’s attention. I began to suspect that John was trying to pass off his own work as an early, “lost” effort from a critical darling—hardly an unusual deception. The revered shoegaze band My Bloody Valentine, for example, made fans wait 22 years between albums, and in the interim, a few acolytes uploaded compositions under their name, hoping for instant viral buzz.

When I raised this possibility, John rejected it out of hand: “i am not a musician. i just work in the industry.” Was he an employee of Hyperdub, then? A studio tech? “i work in a studio that has overlap with hyperdub,” he said. He continued to nix my questions about where exactly the song had come from: “i am close with the source and i don’t want to tarnish my relationships.” Then why leak it at all, I wondered—“just because,” he wrote, with typical reticence. I was beginning to think, however weird John was, that he might have been telling the truth.

After all, I couldn’t prove “Wasted Youth” wasn’t Burial, and I wouldn’t be shocked if it was. Really, the most suspicious element of this dialogue was that I was a participant.

I haven’t made a living as a music critic for quite some time; weren’t there others more qualified to hear John’s dubious .wav file? He admitted he’d sent it to “a few people,” adding, “i selected people i thought would have interest in my find.” In that case, I figured, the track would soon be all over the blogosphere. Unless, like me, the other recipients had written off John as a scammer.

Since John put the suspect song on YouTube, it’s been viewed 45 times, meaning I’m not the only one to have heard it. Still, there’s no coverage anywhere. Perhaps everyone else is as paralyzed by uncertainty as I am—in no way convinced this is the real deal, and yet wondering if it could be.