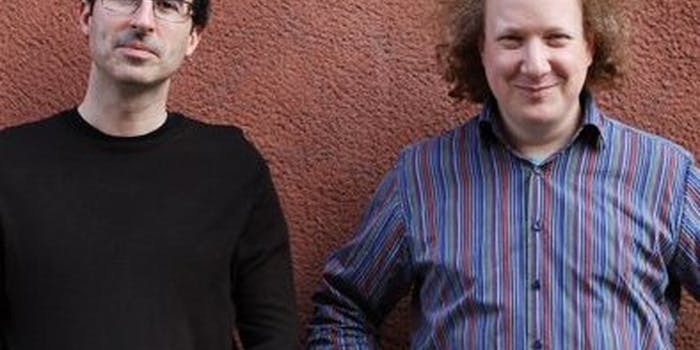 Behind “The Bugle”: An interview with comedian Andy Zaltzman

The podcast host discusses how his partnership with John Oliver, his news sources, and how the Olympics just might save the world.

Podcasts soundtrack your road trips, liven up your commutes, and number in the unimaginable thousands. Each week, Podspotting brings you interviews, commentary and general gabbing on some of the best and most fascinating dispatches from the new audio frontier.

Here’s a mildly peculiar fact about comedy podcasts: a considerable amount of them aren’t particularly funny.

Which is not to say that there aren’t a lot of laughs to be found in WTF with Marc Maron, The Nerdist, or The Mental Illness Happy Hour, for example. But those shows are as much about probing a guest, discussing process, or eliciting insider anecdotes as they are about inciting laughter.

The Bugle, however, is not that kind of podcast. Instead, The Bugle — tagline: “Audio newspaper for a visual world” — is side-splittingly, ludicrously, uproariously, almost painfully hysterical. Its business is hilarity, and business is very good indeed.

The Daily Show correspondent John Oliver and British comedian Andy Zaltzman, longtime creative partners who’d for years performed together on the stage and in previous comedy radio shows for the BBC, began the podcast in 2007 for the News Corporation-owned newspaper The Times. Each week, Oliver and Zaltzman spend 45 minutes discussing the last seven days’ worth of news headlines—skewering politicians, celebrities and despots across the globe.

The Times cut The Bugle loose last year—a development that, Zaltzman insists, has nothing to do with the gleeful barbs the podcast aimed at News Corporation during the phone-hacking scandal that sank The News of the World. Now an independent production—the podcast solicits donations through a voluntary subscription system—The Bugle has hit two major milestones this year: Its 200th episode was released over the summer, and on Sunday, Oct. 14, it turned five years old. The Olympics provided the podcast with two weeks of daily micro-episodes, in which Zaltzman shared his experiences attending the games. Zaltzman also made a guest appearance on John Oliver’s New York Stand-Up Show on Comedy Central.

Just before The Bugle’s wood anniversary, Zaltzman spoke with Podspotting via Skype, discussing the podcast’s broad range of stories, the not-so-secret origin story of the Zaltzman/Oliver partnership, and how the Olympics just might save the world.

Daily Dot: The Bugle’s had an enormous wealth of material lately, between the U.S. election, the Olympics, and the ongoing economic doldrums. Have there ever been periods in the podcast’s life when you’ve actually had to struggle to find things to talk about?

Well, not especially, because the world arguably produces far too much news, and a lot of it is quite depressing. I think that’s generally the way [it is]. And of course consuming too much news is quite unhealthy on a spiritual level. So while there are occasionally weeks where not too much is happening, we’ll usually take that opportunity to throw in a few lighter stories and some of the completely irrelevant, but quite funny, things that have happened around the world. You have to splice that in with all the serious stuff that is happening. Otherwise your life would become highly, overwhelmingly miserable.

DD: What kind of news diet do you consume? It seems like you’d have to be reading quite a bit of news to discover some of the more obscure things that you and John talk about.

I read a couple of newspapers most days, and watch bits of TV news and listen to bits of radio news. But apart from that, I spend entirely too much time on the Internet looking for odd stories to fill gaps or provide a bit of variety in the podcast. Fortunately for us, there’s always someone, somewhere in the world, on any given day, who will have done something completely ludicrous. So there’s always that to fall back on. Sometimes that person is someone like Mahmoud Ahmadinejad or Hugo Chavez. Other times it’s just an ordinary person, stealing their moment in the idiotic spotlight.

DD: You mentioned that the news can be somewhat existentially depressing. Has doing The Bugle, and being that much more aware as a result, ever made you feel like a more depressed person?

Well, certainly as a result of doing The Bugle every week I’ve taken more notice of the news than I used to. But on the flip side, when you force yourself to find a funny angle within it, that can lighten your mood a lot, even if there are times when you want to smash your television to pieces in frustration. But there are positives too, as I said. Certainly, during those two and a half weeks of the Olympics … I honestly don’t think Britain has ever been happier in its entire history. Basically all news was suspended. There could have been a nuclear strike in France and it would have been a small additional item on the news, placed after the news of another bronze medal in cycling for Britain. And that really was our nation at its happiest, when we could just ignore reality for two weeks.

DD: If only the Olympics could happen more often.

It certainly shows a beacon of hope for the world. All we really need is an Olympics on, probably 50 weeks of every year, rotating between 25 major cities, and then the world would be permanently happy.

DD: Even if things weren’t actually better across the world, they would certainly feel better.

Right, it wouldn’t make any actual change, but it makes you think things are better, and that’s better than things actually being better. You could even deploy the Olympics to various global trouble spots. With modern technology they must be able to put up a stadium in about a week. The International Olympic Committee could just turn up in the Democratic Republic of the Congo, stick up a massive stadium, hold an Olympics, and basically everything would be fine for a bit.

DD: Political satire is a very specific, unique field of comedy. Did you have certain inspirations or touchstones that made you want to strike off in that direction?

It’s always been what I’ve been most interested in when it comes to comedy. I’ve never really had a single specific stand-up hero. I guess I was inspired by this TV show, a British show called The Day Today, which was a spoof program produced by Armando Iannucci [of The Thick of It and Veep fame]. I really loved that show. And I also studied ancient Greek comedy at university.

That is not a joke; I genuinely did study that. And I was inspired by that comedy, which was very political and very satirical in nature. And obviously, you know, some of the jokes have dated a bit. But, basically, most of the jokes that you see today were done in some form two and a half thousand years ago in Athens.

DD: By the time The Bugle started, you partnership with John Oliver was pretty well-established. How did the two of you first cross paths?

When we were both quite new as stand-ups we were put on the same tour, which was a series of gigs at student unions. We spent a lot of time together sitting on trains and in low-budget bed and breakfasts around the glamor spots of Britain. We started doing this thing together where John would slick his hair back and pretend to be an American stand-up named Johnny Dynamite, who basically had about three jokes and the catchphrase “I’m dynamite!” And then he’d mime setting off dynamite and on the off-stage mic I’d make an exploding noise. So that’s maybe the origin story of our chemistry.

DD: This summer The Bugle passed 200 episodes, and the podcast turns five years old this weekend. How has its longevity and popularity squared with any expectations you had when you and John started it in 2007?

I can’t really remember having any expectations for it at all. Most of the things John and I had done had been canceled pretty rapidly, regardless of how good we thought they were. But we started to attract an audience pretty quickly, and then The Times seemed to slightly forget that they were still paying for it. For a solid couple of years we sort of stopped hearing from them. So it’s always been really fun to do, because in podcasting you have total editorial freedom. Even when we were under The Times umbrella they never interfered with the content, not even during the phone-hacking scandal.

DD: How grueling is The Bugle to create? You and John Oliver are creating a solid 45 minutes of comedy every week, on top of other demands, and with each of you on separate sides of the Atlantic.

I mean he’s got more things going on than I have. Although I have two children, whereas he just has a dog and a wife. But we write it quite fast. We usually talk on a Wednesday or Thursday evening, before recording on Friday, about what stories we’re going to do. And then we write separately. So we’re always writing in a constricted timespan. Which means that a lot of it, I think, feels fresh, because they are brand-new ideas, and sometimes slightly unfinished ideas, which can give it a bit of a raw charm, I guess. And we’ve learned to write in a pretty improvisational way, so we can just pick up an idea and run with it off the cuff. It’s sort of half-scripted, in that things will be written down, but then we try to react off each other’s jokes. It’s at its best, I think, when it has that balance of stuff that’s prepared and stuff that’s spontaneous.

DD: You’ve said before that The Bugle’s very barbed take on the phone-hacking scandal didn’t have anything to do with The Times not carrying the podcast anymore. But all the same, did you get any charge from skewering Rupert Murdoch on a weekly basis whilst getting paid by News Corporation? That seems like it would be sort of fun.

To be honest, we’d known for quite a while that at some point The Times would have to pull the plug on us. Because they’d been paying for it for four years and it was not bringing anything financial back. Inevitably there’d come a point when they’d stop doing it. So certainly we suspected that they weren’t taking much notice of The Bugle by then. So it didn’t really feel like it was particularly edgy. It was just kind of a fun thing to do and a story that needed covering, since it was massive news and we, as a topical and satirical show, clearly had to address it. And we had a decent listener base, so it wasn’t like we were risking the entire future of the show. It was just a story that was, frankly, a bit baffling, and we had to cover it. And there was no real way of covering it in a positive way, obviously.

DD: The Bugle is a very global podcast. The stories don’t just come from the United States and the United Kingdom. Do you and John make an effort to be wide-ranging with your material?

I think it makes it a more interesting show if it covers stories from all over the world and all different spheres of politics and life. And we have the opportunity to do that, because we have 40 minutes every week, and we don’t have anyone telling us not to do a story about chicken farming in Venezuela because no one cares about it. If we want to do it, we can. Which is a wonderful thing to have.

Photo of Andy Zaltzman and John Oliver via Jen Maler