But before the Bills took the field, the organization sent out an email to the reporters who cover the team informing them of the new media policy for the 2016 season. 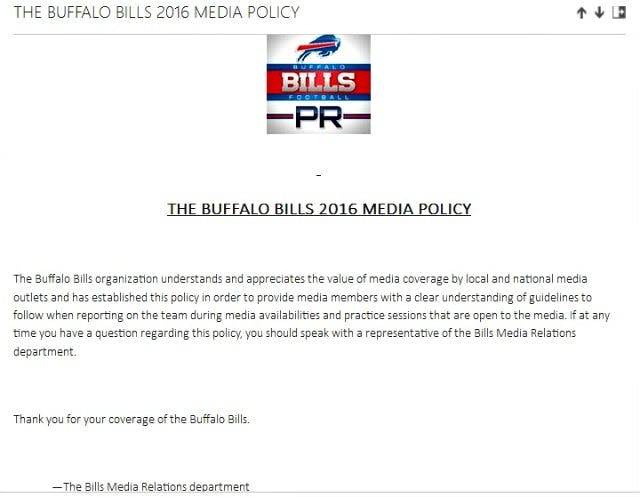 OK, that all seems fine. It’s nice to know the team appreciates the media—as a former NFL reporter, I’m on board with an organization that’s on board with me. So, what does the policy actually say?

OK, that’s bad. It makes sense that football coaches, who happen to be some of the most paranoid people on earth, don’t want specific plays or specific personnel groupings to be public knowledge. Most NFL reporters understand that and are careful not to give away confidential information that an opponent could use to its advantage.

But not tweeting about whether a quarterback is intercepted or whether a cornerback was burned by a receiver, well, that’s ridiculous. And that was an opinion shared by many after the Bills released their policy.

Luckily, the reporters weren’t deterred from tweeting their observations during the practice. Some were simply cryptic about what was happening. Warning: Math will be involved.

The grass is a greenish color, and some #Bills players are wearing a whitish jersey with numbers on them. Others, bluish with other numbers.

A QB not named Tyrod Taylor or Cardale Jones just threw a pick-six on his first throw of team work.

A quarterback just threw a pass and the football landed in the hands of an offensive player at today's Bills OTA practice.

A former Bills running back who wore No. 34 and might be a member of the Pro Football HOF is watching practice today.

A Bills quarterback with a jersey number that is the square root of 25 threw a football that missed its intended target.

The last pass of day by a quarterback not named Taylor or Jones was intercepted by a player wearing a jersey with the absolute value of -50.

But some reporters completely ignored the policy changes altogether.

Jordan Mills is lining up with the Bills' first team at right tackle.

Jarrett Boykin and Greg Little both getting reps with Tyrod Taylor along with Robert Woods.

The policy was even confusing for at least one Bills offensive lineman.

Not sure if I'm supposed to be tweeting this with the new media policy but since we started practice there are cookies in the lunch room.

And don’t blame head coach Rex Ryan. Apparently, he knows nothing about it. Apparently.

Rex Ryan: "Our media policy isn't something that I'm involved with." He then points to team spokesperson. https://t.co/CaDENLTp6r

Ultimately, the Pro Football Writers Association—which works as an advocate for writers covering NFL teams—will get involved, and the Bills probably will back down from this policy. Otherwise, perhaps not as many people will pay attention.

But in a league where the Bills are considered one of the worst-run organizations, perhaps that’s not such a terrible thing for the franchise.

"Hey Jonah, we need you to cover Bills practice…

…but you can't report anything of interest to the viewers." pic.twitter.com/aRle1jNRd6