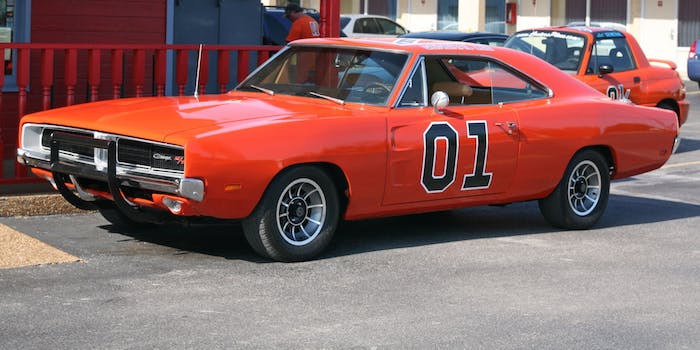 Not everybody is in favor of this move.

When TV Land made the decision this week to stop showing reruns of “The Dukes of Hazzard” because of the Confederate flag painted on the famous General Lee, fans of the Duke brothers were less than pleased.

Now, one influential Southerner has decided to give the real General Lee what he believes is a much-needed makeover—and he has the power to do it.

That man’s name is Bubba Watson, and you might know him as the professional golfer who’s ranked No. 3 in the world and the winner of two Masters titles. He also happens to own one of the real General Lees that was used on the show.

The latest furor over the Confederate flag, sparked by the June 17 mass-shooting of nine churchgoers in Charleston, South Carolina, has convinced Watson to white-wash the old flag off the roof of his car and paint something a little more patriotic.

All men ARE created equal, I believe that so I will be painting the American flag over the roof of the General Lee #USA

Fortunately, there’s always time to amend our dreams to satisfy the latest cultural mores. Yet, unsurprisingly, not everybody was in agreement with Watson’s decision.

Even Cooter got involved.

Either way, the momentum is growing, and soon enough it seems, the symbol that so many see as racist will become an unseen relic of history (unless you happen to step into Cooter’s store, apparently). The next step perhaps? Changing the moniker of the car itself. After all, we know for whom it’s named.

Photo via nostri imago/Flickr (CC BY 2.0)