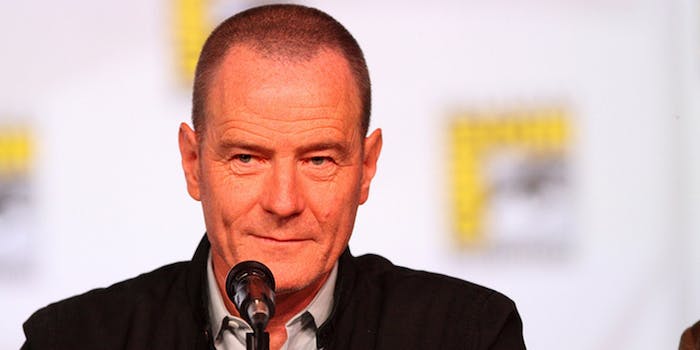 “Give me a call. I like Lex Luthor. I think he's misunderstood. He's a lovable, sweet man.”

It’s been an emotional rollercoaster for those following the casting of Zack Snyder’s Man of Steel sequel. First, Ben Affleck was revealed as the new Batman, an announcement people genuinely liked and accepted without much fanfare (just kidding). But the wounds seemed to be salved by the news that Bryan Cranston would be playing villain Lex Luthor.

Fans rejoiced! Cranston is beloved for his nuanced and harrowing portrayal of Breaking Bad’s anti-hero Walter White. He could make Lex Luthor into an awesome, sociopathic, multifaceted villain. Mr. White and Mr. Luthor are both bald. They’re both doomed by their hubris. This movie may not suck after all!

An amazing fanmade trailer on YouTube, depicting Affleck as Batman and Cranston as Luthor, fueled the fire.

Except Cranston isn’t actually signed on to play the bald baddie. What?!

Everyone may have jumped the gun. Though news of Cranston’s casting made Rolling Stone, Daily Beast, BuzzFeed, io9, Perez Hilton, ABC News, and elsewhere (we were all over it) on Tuesday, turns out news outlets are now reporting that Cranston has not been hired.

MSN Entertainment debunked the rumor yesterday, saying the idea came from a fan wishlist and not an actual casting announcement. The San Jose Mercury News also reported that the rumor originated on a fake comic book news site called Cosmic Book News. Cranston responded to the rumor by telling a Metro reporter, “Give me a call. I like Lex Luthor. I think he’s misunderstood. He’s a lovable, sweet man.”

So. Welcome to square one.