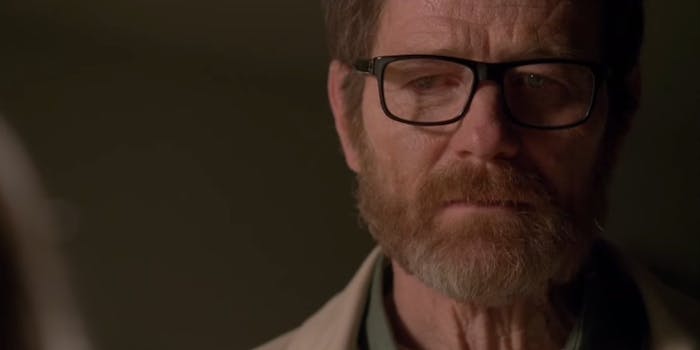 Let’s get something straight about this rumored ‘Breaking Bad’ return

Breaking Bad is over. Keep it that way.

Warning: This article contains spoilers for the ending of Breaking Bad.

Just when we thought we’ve made our peace with the Breaking Bad ending, Bryan Cranston pulls us back in.

The actor appeared on CNN yesterday to promote Godzilla, and Ashleigh Banfield asked him about the show’s ending after telling her he almost passed on doing the film because he was trying to pick projects that met the high standards he had with Breaking Bad.

Breaking Bad will likely come up in every interview Cranston will ever do for years to come (much like Daniel Radcliffe and the Harry Potter films), even though he’s already done other projects and has a Tony nomination under his belt. It’s a show that millions watched and will continue to binge-watch until the day it goes off Netflix, at which point it’ll be revered with the same fervor and respect that The Wire gets from TV buffs.

And as a veteran of the entertainment industry, Cranston must have some idea that anything he says regarding Breaking Bad will make headlines, just as when he dropped the tiniest of possibilities that Walter White survived the shootout that ultimately killed him in the finale.

Banfield: That final scene, that final image… I wasn’t so sure that you died. I really wasn’t. Your eyes were open, and I thought, ‘What if the police just take him into custody, he gets better, breaks out, and just goes nuts?’

Cranston: Hey, you never saw bags zip up or anything, or anybody say… you know.

When she asked about a possible Breaking Bad movie, he answered with a coy “Never say never.”

When Breaking Bad‘s finale aired last September, it was described as being near-flawless. It answered every single question we had (except one), it didn’t suddenly cut to black, it didn’t mislead the audience for its entire run, the “it was all a dream” ending only happened as a DVD extra, and the main antihero got what he deserved (unlike another series that featured a serial killer).

“I feel that the ending satisfies me and that’s something that I’m happy about,” Breaking Bad creator Vince Gilligan told Entertainment Weekly following the series finale.

But now that Cranston planted the seed in people’s heads, they’re not so sure that Walter White is dead.

Cranston’s “never say never” quote, that Breaking Bad “isn’t necessarily over” and posing the question that maybe Walter White might’ve survived instantly made headlines. Fans are now at odds over whether Cranston’s just messing with them… and wondering if they even want more Breaking Bad at all.

We’ve watched enough television in recent years to know that a character is never truly dead until you see the corpse—just look at the Hannibal season finale—and if there’s magic or supernatural elements or a high-functioning sociopath turned consulting detective involved, that might not even be a guarantee. Maybe we’ll see Ned Stark magically walking around, totally fine minus a head on his neck in two seasons’ time.

(Fear not, spoiler-phobes! That won’t actually happen—at least that I know of. Events in future books aren’t a guarantee.)

So is Breaking Bad coming back? Will there be a movie? Did Walter White survive? It’s a prime example of Betteridge’s law of headlines, which states, “Any headline which ends in a question mark can be answered by the word no.”

During Breaking Bad’s final eight-episode run, the cast and writers did a lot of press. They talked to major entertainment websites and shows just about every week, they regularly appeared on Talking Bad to discuss the show right after it aired with Chris Hardwick, Jimmy Fallon made a longform parody (in which Cranston and Aaron Paul showed up), and Conan O’Brien devoted an entire episode to talking to Gilligan and the cast.

So let’s look back at some of that press coverage, shall we?

“People always ask me, ‘Did you know how Breaking Bad was gonna end from the get-go?’ and I always say, ‘No I didn’t,’ and that’s the truth,” Gilligan explained. “But I kinda always did know that Walter White should not survive this series. How that was gonna come to pass was very much up in the air up until we broke this final episode.”

Gilligan to the Los Angeles Times:

“It’s implicit to me in the promise of that first episode of ‘Breaking Bad’ is that he’s not going to survive ‘Breaking Bad.’ It just felt right that we saw his demise.”

“We didn’t feel an absolute need for Walt to expire at the end of the show. Our gut told us it was right.”

“But ultimately, I think [Walter White dying] is the best ending. A real satisfying ending. And I’m so grateful for that.”

Even the last page of the “Felina” screenplay, posted to Reddit last fall, includes one seemingly definite ruling:

And if you still have doubts, just see how he and Paul reacted to reading it for the first time. “So I guess there won’t be a sequel,” Cranston said, laughing.

It’s probably safe to say that Cranston was probably pulling Banfield’s leg. We may see Walter White make a cameo in Better Call Saul, the Breaking Bad prequel starring Bob Odenkirk, and we’re sure to read plenty of stories from the good ol’ days on set when Cranston’s memoir comes out.

But for now, let Walter White stay buried and full of bullet holes—body bag or no.