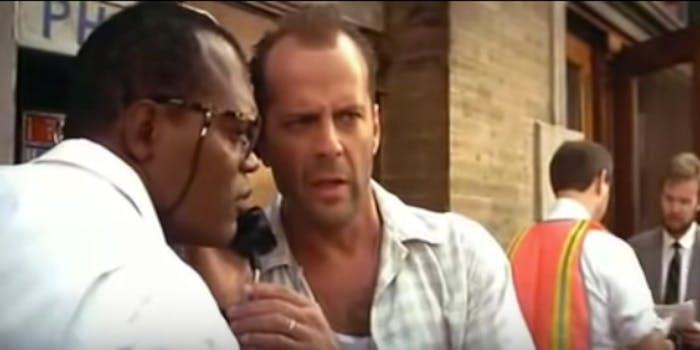 Could Bruce Willis and Sam Jackson have stopped that ‘Die Hard 3’ bomb with a cab?

The answer will kind of bum you out.

The New York City Taxi and Limousine Commission recently released a ton of data representing “over 1.1 billion individual taxi trips in the city from January 2009 through June 2015,” and developer Todd W. Schneider is using it for the most important cause possible: figuring out if Bruce Willis and Samuel L. Jackson would have been able to drive across town in time to diffuse a bomb in Die Hard: With a Vengeance.

If you haven’t seen the movie, Willis and Jackson find out they have 30 minutes to get from 72nd Street and Broadway to the Wall Street 2/3 subway station during rush hour in order to stop a terrorist attack. They drive a taxi through Central Park, and barely get there in time.

Schneider crunched the numbers to see how feasible completing that drive actually is:

McClane and Carver leave the Upper West Side at 9:50 AM, so I took all taxi rides that:

And made a histogram of travel times: 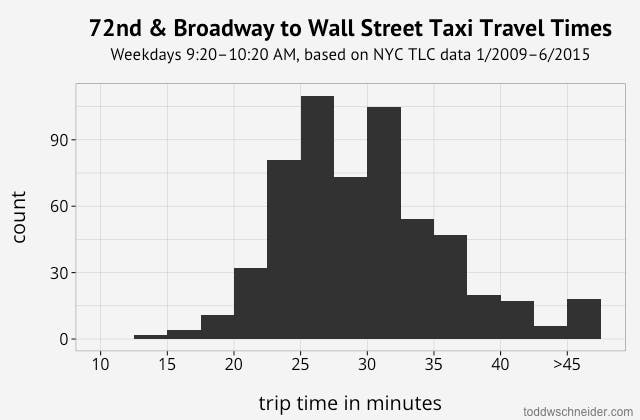 In the data, more than half of all cabs were able to complete similar rides in under 30 minutes, meaning that Willis and Jackson would have definitely been pressed for time on their ride, but also would have been fairly likely to arrive at their destination with enough time to save the day.

Now, our heroes might need a few minutes to commandeer a cab and get down to the subway platform on foot, so if we allot 3 minutes for those tasks and 27 minutes for driving, then only 39% of trips make it in 27 minutes or less. Still, in the movie they make it seem like a herculean task with almost zero probability of success, when in reality it’s just about average. This seems to be the rare action movie sequence which is actually easier to recreate in real life than in the movies!

You live, you learn.