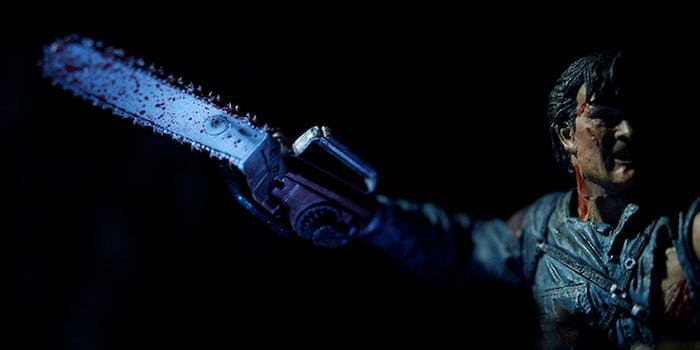 There were a lot of revelations at last weekend’s Comic-Con, but there’s one that had a lot of fans holding their breath: Is an Evil Dead series really coming to TV?

The Evil Dead, a 1981 horror film directed by Sam Raimi and starring actor Bruce Campbell as the film’s hero, Ash, has become a midnight movie favorite, and has been copied nearly to death by modern filmmakers. Last Friday, during a panel for the film adaptation of video game The Last of Us, Raimi confirmed that he, his brother Ivan, and Campbell are writing an Evil Dead series for TV.

But who would star? On Sunday night, Campbell gave fans even more hopes for the series when he tweeted he wants the job. Campbell briefly appeared in the 2013 Evil Dead remake, which might have signaled his return to a potential Evil Dead II remake. Or a TV series.

“@DeaditeBill: Only if @GroovyBruce is the STAR of this new tv series will I accept. That’s the plan. pic.twitter.com/m7EkBFpl1b

The current TV landscape might actually be perfect for this reboot, if the success of The Walking Dead is any indication. There are no details about cast yet, or where the show will end up. Let’s cross our chainsaws that it actually makes it.

Update 4:22pm CT, Nov. 11: Badass Digest confirmed today that the show is very much happening. Ten half-hour episodes of Ash vs. the Evil Dead are coming to Starz, with Raimi and Campbell both on board.