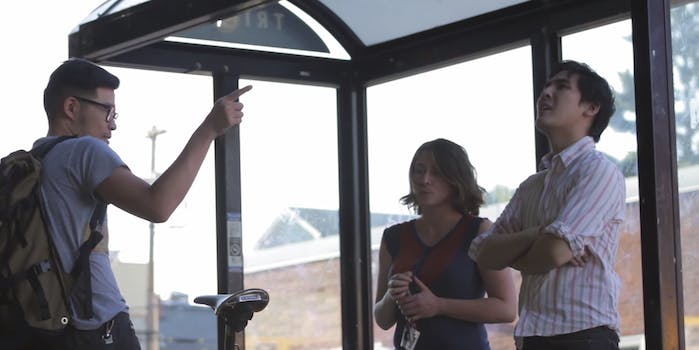 Prankster puts ‘bros before hoes’ theory to the test

Aren't we all bros?

Is every man each other’s “bro?” Does he have to place that “bro” in front of any supposed “hoes” regardless of if he’s complete strangers with the aforementioned “bro?”

YouTuber Aria Inthavong tested out the limits of the “bros before hoes” concept in a recent social experiment. Would strangers in the park back him up in an argument with his supposed girlfriend?

The concept of “bros before hoes,” according to Urban Dictionary, is one where the man must put his male friends above his girlfriend, or “hoe.” This means a man would choose to spend time with his “bro” over his girlfriend. The bond of the bro is sacred. However, does that bond of manhood extend to all men, even if they’re strangers? According to Inthavong’s video, it does.

In the clip, Inthavong runs at random men, tells them to have his back before his angry girlfriend shows up. Inthavong then claims to have been with the stranger the night before. The stranger keeps backing up the lies, making up places they went, things they did, and ways the pair met, as the girlfriend quizzes them. The deception only falls apart when the girlfriend finally asks if they know her boyfriend’s name. “Kevin,” one man guesses incorrectly, before dropping the facade and telling him he’s on his own.

But Inthavong told the Daily Dot via email that he expected these results:

I actually wasn’t surprised by their reactions, I think if I were worried that they wouldn’t play along, we probably wouldn’t have gone ahead with the shoot. But I just knew that these guys would play along, and not necessarily because of any “bro code”. Just imagine yourself walking down a street, some crazy, out-of-breath Asian man runs up to you, and thrusts you into this situation. There are three ways of handling it – you can walk away (as a couple did), you can play along, or you can just be honest and say that I’m lying. Out of all those options, the one that’d be most awkward for you would be to sell me out, because then suddenly you’re responsible for starting a fight – and no one wants to be in the middle of that. That’s what I was anticipating, and it worked out, because not a single man that day outright told my “girlfriend” that I was lying. They’d either walk away or try their best to play along. Psychology!

Based on this limited experiment, it seems that at least all men are willing to be “bros,” on good faith, but their bro-ship can only extend within the limits of intellect and plausibility. Hopefully some bros who watch this will realized they should just tell people when another man, friend or not, is a liar.