South by Southwest is a magical place where everyone can have an opinion and free speech is encouraged. But once you leave, the cold reality hits. One man found out the true meaning of oppression Monday, when he was allegedly kicked off a flight for wearing a Broad City shirt.

More specifically, student Daniel Podolsky’s shirt said “Broad Fucking City,” and this is apparently not in line with Southwest Airlines’ policy. He was reportedly on a flight from Dallas to Chicago on Monday, but it was diverted to St. Louis because of inclement weather. He claims he went to the bathroom, and when he returned to the gate, the agent told him his shirt would not be allowed. Here’s a photo of him wearing the shirt at Stubb’s during SXSW. In a Facebook post, he claims this is how much was visible on the flight. 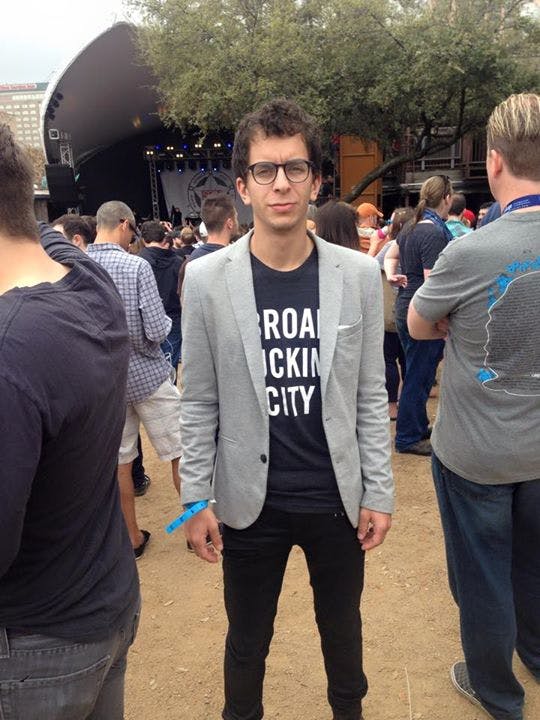 In an interview with St. Louis’s Fox 2 (Podolsky allegedly reached out to them after being kicked off the flight), he says he was never given a chance to take his shirt off before the plane took off again: “It just happened so fast. Within 30 seconds the flight was gone. I mean I would have gladly done so.”

However, video of an interaction with another Southwest employee on the plane shows Podolsky being quite stubborn about the issue. The employee asks if he can change his shirt (“Nope”) or leave his jacket on (“Nope”) or turn it inside out (“Nope”). He then cites his freedom of speech, and asks if they can “take a poll.” (Nope.) He also called out the agent he says originally complained. (Editor’s note: This video, originally hosted on Facebook, has since been deleted.)

Podolsky was reportedly finally able to board an evening flight—after changing his shirt. Ilana stands by his actions.

We’ve reached out to Southwest for comment and will update if and when we hear back.

Update 5pm CT, March 24: A Southwest rep has emailed us an official response to the incident.

We count on our Customers to use good judgment and exercise discretion when traveling. Our Employees are responsible for the comfort of everyone onboard a flight and our reports indicate that we had Customers express concern over a t-shirt which contained offensive language. While Southwest does not have a “dress code,” our Contract of Carriage allows us to refuse to transport a Customer whose clothing is lewd, obscene, or patently offensive. The Customer was not allowed to travel after being given several options, including putting his jacket back on or replacing the shirt. The Customer was accommodated on a Southwest flight later that same evening.

Update 8:15am CT, March 25: Podolsky’s video has since been deleted from Facebook.