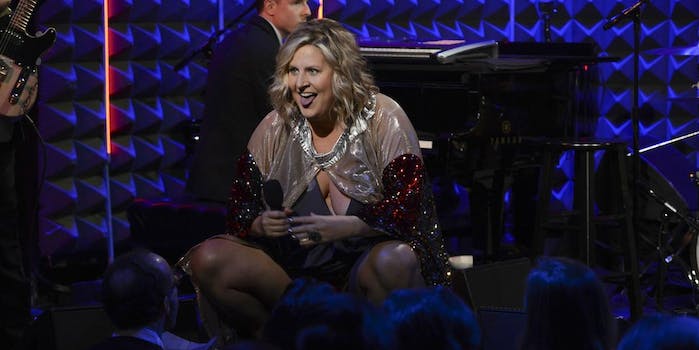 Bridget Everett on Barry Manilow, the power of titties, and tender moments

'I have a job where you can drink lot of Chardonnay and whip your titties out.'

With that intro, Bridget Everett dives into “What I Gotta Do,” the chorus of which passionately wonders, “What I gotta do to get that dick in my mouth?” This introduces us to Everett’s new Comedy Central special, Gynecological Wonder, filmed by Lance Bangs at NYC venue Joe’s Pub. The special opens with a shot of Everett as she’s dreaming in bed, clad in a “Manilow” jersey. Stars like Sarah Jessica Parker and Amy Schumer stop by to testify to Everett’s raw power and mythical breasts.

Tits are a big part of Everett’s live show. During Gynecological Wonder, we see a blurry orb appear over Everett’s nipples several times, as her pendulous breasts threaten to swing too far. Everett wields her body like a Swiss Army Knife: She’s going to motorboat you, she’s going to sit on your face, she’s going to lick you, she’s going to spit Chardonnay on you. Her voice will blow the bangs off your forehead. When she prowls the audience, that’s when the show’s energy pivots—every show is different, fused to the chemistry of the crowd.

“I like that people have a strong reaction, one way or another,” Everett said. “I want them to feel something down somewhere.”

Down in her somewhere, Everett’s a true storyteller: “It’s not just like a full-on, aggressive, in-your-face cabaret fuckfest,” she said. “There’s also the tender moments, which are important to me.”

At the beginning of the special, she tells a story about her breasts developing as a young girl, and only having nipples. (“Little nippy titty,” the kids called her.) This leads into readymade anthem “Titties,” which recounts all the different types there are, as we’re urged to “put ’em in the air”: beavertail, tube sock, ding-dong, mousetrap, rubber ducky. She does costume changes on stage, audibly out of breath, which only lends to the kinetic energy of her performances.

Gynecological Wonder, Everett explains, is “reflective not just of my vagina but of my whole body and spirit.” She found the perfect partner in Bangs, who’s also done videos for Sonic Youth and Pavement. He has cameras filming at all angles, capturing Everett’s Swiss Army Knife work in high-definition.

Everett says she’s been performing since college, when she would sing in karaoke bars,“have a couple drinks, and just go apeshit. And then I just didn’t realize you could do that professionally, and it’s taken me a long time to figure that out, but it turns out you can. I have a job where you can drink lot of Chardonnay and whip your titties out.”

Everett’s go-to karaoke songs were anything “female and anthemic,” like Alanis Morissette’s “You Oughta Know” and Janis Joplin’s “Piece of My Heart.” “Female and anthemic” is a fair approximation of her songs, too. However, Barry Manilow might be her true kindred spirit.

Her mother, a music teacher, cultivated a Manilow education when she was growing up in Manhattan, Kansas. Everett says her mom would listen to Manilow, maybe “cry a bit,” and Everett would brush her hair as they sang together. Her brothers and sisters all played piano and sang, and as the youngest of six kids, Everett was absorbing the music coming out of each bedroom: Queen, REO Speedwagon, Air Supply, Bread. Last month, Everett got to meet Manilow.

“I didn’t shit my pants, but it was a very magical moment all the same,” she said.

While Everett’s been performing in NYC for more than a decade, her live show took a different shape when she hooked up with her band the Tender Moments. Adam Horovitz (the Beastie Boys’ Ad-Rock) plays bass, and Everett explains he’s the one who encouraged her to go home and write “Titties,” after she started singing it during a softball game and thought it was ridiculous.

She also found an ally in Schumer. The two became friends after Just for Laughs Montreal about five years ago, and Schumer asked if she wanted to go on the road with her, which helped Everett tweak her routine for comedy clubs. Everett closed out the third season of Inside Amy Schumer on Tuesday in the most on-brand way possible, after wrapping the last two seasons as well. She sings new song “Put Your Dick Away,” prefacing it with this: “Don’t touch my pussy unless I say you can touch my pussy, Mr. Cosby!”

It’s evident her approach to performance translates from club to TV, but the real experiment with Gynecological Wonder is seeing if it pulls in fans unfamiliar with Everett’s revues—if it can draw a new audience to her bosom.

Gynecological Wonder presents the woman and the myth, but she admits there’s a fine line between Bridget the performer and Bridget the human.

“The onstage Bridget is lawless and always has a bottle of Chardonnay,” she said. “The offstage Bridget can be found in her apartment, on her couch, with her new dog Poppy. …In order to be that person onstage, I have to store up all the energy. The Bridget on stage is somebody I wish I could always be, but you gotta have gas in the tank all the time.

“But the spirit of her is what I really love.”