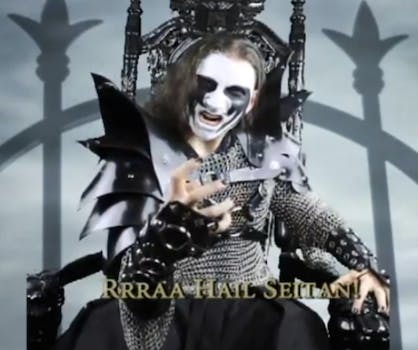 In the kitchen with Vegan Black Metal Chef

Brian Manowitz is a man made for the niche crowds.

Better known on YouTube as Vegan Black Metal Chef, Manowitz is a somewhat self-explanatory personality whose breadwinning talent is that he writes informative, often hilarious black metal songs about cooking vegan food. Over dark, distorted guitar riffs and double-bass drums, Manowitz explains all the proper procedures one should take to make a delicious plate of black beans or tempura asparagus sushi.

“My cooking habits are not exactly conventional,” Manowitz explained to the Daily Dot.

“Usually when you try out a lot of vegetarian things, people complain that they’re not very tasty. In terms of a lot of more traditional vegan recipes that I’ve tried, when you follow them to a T, they always seem to come out terrible. I wanted to make it possible for people to follow recipes that don’t come out so terrible.”

Manowitz hones in on those not-so-terrible recipes from the kitchen in his Orlando, Fla., home, one decorated with leather-bound cabinets, medieval meat cleavers, and ominous candles. He cooks regularly, essentially eschews eating out, and treats every meal like a tryout for another video lesson.

“I’ll make a whole lot of bad food to try to arrive at something really good,” he said. “When things become good, they become part of my normal regiment of things to eat. And as long as they’re at the pinnacle of food existence in my eyes, they’re deserving of an episode.”

A month later, Vegan Black Metal Chef’s second video—which taught viewers how to make Manowitz’s signature All Star Redneck Medley, a combination of mashed potatoes, baked beans, and corn—picked up only 365,000 views. To date, it’s the second most-watched video in his nine-episode series; no other installment has more than 152,000 views.

On the surface, black metal and vegan dining might seem as jarring together as Manowitz’s black-and-white face paint and spiked garb. But, as bands like Wolves in the Throne Room have helped illustrate, the genre can be quite progressive in both sound and inspiration, addressing environmental, spiritual, and, in the case of Manowitz, culinary concerns.

He’s clearly isn’t in it for the novelty factor.

“At the beginning, there was a giant ‘What the fuck?’ factor,” Manowitz conceded. “After that, once it was just accepted that there was a vegan black metal chef who ran a legitimate cooking instruction show, that sort of weeded out the people who weren’t too interested in the two cultures. That process occurred naturally, and I see a core base growing while everybody else in the world has sort of slowed down.”

Attention’s slowed down, but it’s also somewhat plateaued—good news for someone who knew that he’d be better off appealing to a niche crowd than going for a hit with every episode. His last three videos have all received a similar number of views, finishing their rush between 22,000 and 33,000.

Getting a grip on who Manowitz’s reliable viewers are will play a major part in how he sets Vegan Death Metal Chef up for the channel’s second year. A member of YouTube’s Partners program, Manowitz explained that running the channel is his foremost focus. (He also plays in a few bands around Orlando that keep some of his attention.) He said that he was approached by MTV for a TV show shortly after the pad thai episode hit screens, but that the network passed after  it deemed the concept too inaccessible.

“My main focus hasn’t been to jump on a TV network,” he said. “I just want to get better with each episode and refine what’s there, write better songs and improve the video aspect.

“I’m going to be releasing a DVD and an album with all of year one’s backing tracks. A lot of people have been requesting that.”