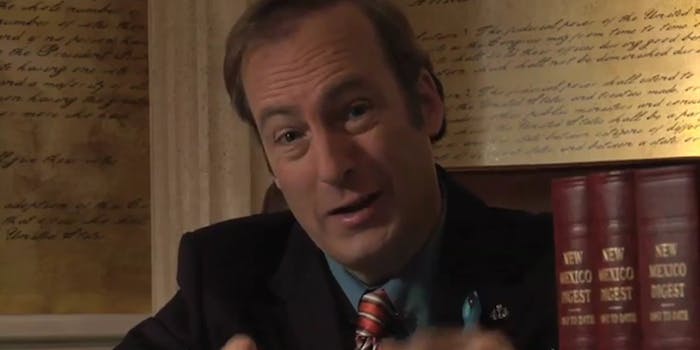 Bob Odenkirk channels his Breaking Bad character Saul Goodman and shows you who you shouldn't call.

Breaking Bad’s final season premieres Sunday on AMC, and the show’s dedicated fans have been fortifying themselves in various ways, bracing for the end. Vulture’s Julie Klausner asked Bob Odenkirk, who plays loophole-loving Albuquerque lawyer Saul Goodman, to comment on a few especially bad, very real local lawyer ads, including one in which a lawyer may literally be the devil.

Odenkirk, whose character stars in the show’s “Better call Saul” ads, also gives a few important tips for those looking to get the most out of their TV spots, like “don’t look right in the lens.”

These ads are cringe-worthy, but let’s not forget Odenkirk’s first foray into cringe-worthy territory: This sketch from Mr. Show, in which Odenkirk plays the polyester-suited Don Pratt, a lawyer who will come to your house and hang out but knows when to leave if things “get weird.” If Goodman’s character gets his own spinoff after the season finale, which is rumored to be true, we’re hoping Don makes an appearance too.