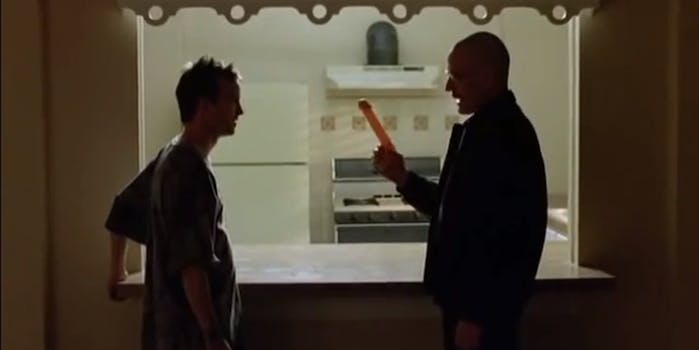 The best ‘Breaking Bad’ outtake of all time

This is Aaron Paul's favorite outtake from Breaking Bad.

In season two of Breaking Bad, there’s a tense, pivotal scene in the closing moments of the “Breakage” episode.

One of Jesse Pinkman’s dealers had been conned by a couple of buyers, leaving him $1,000 short on his share of a new batch of crystal blue. Pinkman tells partner Walter White it’s just “breakage, the cost of doing business,” an explanation that makes them both look weak in the market.

The episode closes with White at Pinkman’s apartment. “You asked me what I want you to do,” White says, with a tone that reveals the dark intensity of his commitment, and places Pinkman’s gun on the table. “I want you to handle it.”

While the clip has been on YouTube for over a year, it only recently surfaced on Reddit, which is fitting, given that actor Aaron Paul referenced it in his popular Ask Me Anything (AMA) on the site.