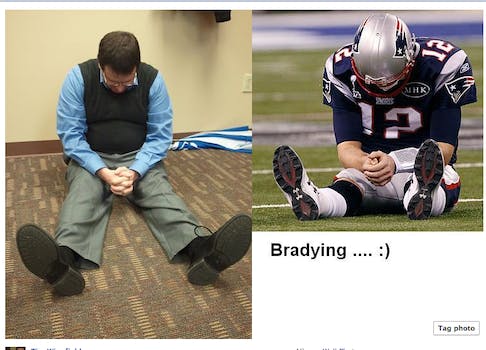 Bradying is the new Tebowing

Tom Brady has apparently inspired a whole new Internet meme, thanks to his pose of dejection after the Super Bowl loss.

Forget Tebowing. Broncos quarterback Tim Tebow, whose tendency to get down on a single knee to pray after a touchdown inadvertently started a wave of imitations, was knocked out of the playoffs weeks ago.

The new craze is Bradying, named after Patriots QB Tom Brady, who lost his second Super Bowl Sunday after throwing an interception late in the 4th-quarter. The new pose? Sitting on the ground, head down, dejected.

Brady wasn’t always perceived this way. He still has more Super Bowl rings than any active quarterback, having won the Big Game three times in four years in the early aughts. Today, if you Google “Bradying,” you’ll probably mostly get entries that make the term something positive.

The person who owns Bradying.com had only posted four times in the past three months, and focused mostly on the man’s hair. But today the site features several people “Bradying” in the new sense of the word.

Perhaps people are starting to like the idea that the champion football player with fantastic long hair and a supermodel wife has been brought down a peg. Or maybe people are just looking to get in on the next ridiculous trend of photographing themselves in weird poses, like Owling or Planking.

The pose’s inspiration is a photo reportedly taken right after Brady threw his sole interception in this year’s Super Bowl, a move that sealed his team’s defeat on Sunday.

Here’s how Internet pranksters have been Bradying in the past day and a half.