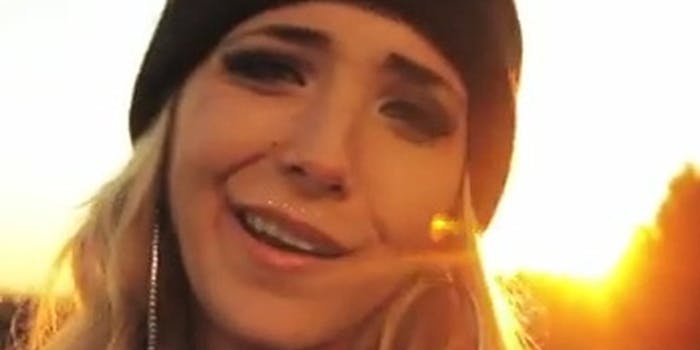 Jenna Marbles has an answer to all those dudes who ask her to bounce her ladyparts. Could it start a new trend?

Jenna Marbles leveled the playing field for the ladies today with her rap song “Bounce That Dick.”

Marbles, the most subscribed-to woman on YouTube, is tired of men telling her to shake her “ass,” because frankly, it’s tired.

She wants men to “wiggle their man junk” for her, instead, although she uses more graphic terms.

Within an hour of the video’s posting, “Bounce That Dick” has already collected 14,000 likes, and 5,000 comments, as well as video responses. (Video views are frozen at 302 due to mass interest, a YouTube bug that still plagues the site.)  “Bounce That Dick” is currently a top trending topic on Twitter, much to unknowing tweeters’ befuddlement.

The song, honestly, isn’t the best rap in the entire world. Marbles, who is not a rapper or a musician, did however, manage to entertain the Internet masses with her clearly tongue-in-cheek performance. YouTubers and fans have taken to telling her the video made their day, calling it “hilarious,” and “fabulous.”

On World Star Hip Hop, however, under the title “Hot Mess of the Week,” the video is currently being lampooned by the black citizens of the Internet, who are accusing Marbles of ruining Hip Hop forever.

“smh at all these people. She’s a fucking comedian. Its a joke,” wrote Elle O’Elle on World Star Hip Hop.

“Bounce That Dick” is also available on iTunes.