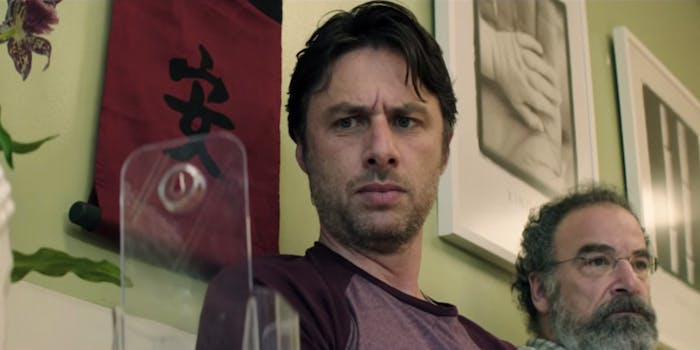 It’s a four-minute reminder that 2011’s Bon Iver, Bon Iver is still an LP the game hasn’t caught up to yet.

Humanist balladeer Justin Vernon—maybe the most earnest, distinct, and reflective singer-songwriter voice of the Obama years—sticks the landing with melancholy lines likes “I know now honey that I can’t pretend” and “I’ve just been up here for goddamn years.” It’s a four-minute reminder that 2011’s Bon Iver, Bon Iver is still an LP the game hasn’t caught up to yet. Murky, looped production pads stray guitar lines and woodwinds, while Vernon’s voice does that wounded-but-masculine turtle dove thing like the most deft of soul-baring-as-a-calling-card musicians.

Score one for Braff. Wish I Was Here’s music supervisor Mary Ramos traveled to Wisconsin to screen the film for Justin Vernon, telling NPR that Vernon’s thematic and structural concept was an on-the-spot call.

“They were enjoying it and laughing, but at a certain point, they just got quiet. When it was over, Justin started humming. We talked afterwards about the relationship between Zach’s character and his brother [Josh Gad], and Justin and Nate talked a little about their father — all the while Justin kept distractedly humming. Eventually, he sang out the words ‘heavenly father.’ Before I even left their house, Justin was recording the first version of the song in his downstairs studio. His inspiration was that immediate.”

Wish I Was Here’s trailer (go ahead and call it Garden State II or This Is 35) mucks around proudly in its echo chamber of precocious balladry—ready to delight as a sad man of economic privilege comes of age on the Pacific Coast. Braff’s protagonist lugs around a swear jar; he tells his daughter at one point to pick out a new wig “just so long as it’s unique and amazing like you.” There’s a voiceover that closes the clip with childhood nostalgia about superheroes before landing on gag reflex closer, “But maybe we’re just the regular people—the ones who get saved.”

The film opens July 18, and its soundtrack is out July 15. The roll call on the soundtrack teeters between Kashi crunch, high fructose corn syrup, and perfectly delicious Wheat Thins; you’ll find the complete tracklist and the streaming version of “Heavenly Father” on NPR’s website.