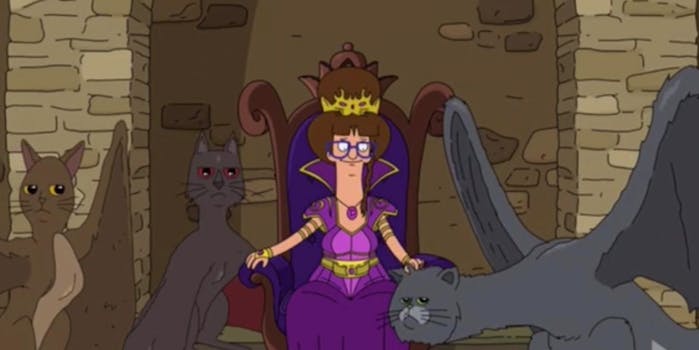 ‘Bob’s Burgers’ did a pitch perfect ‘Game of Thrones’ parody

It's got catdragons and everything.

Between burger-themed cookbooks and animated Sleater-Kinney music videos, the teams over at Fox’s Bob’s Burgers are always finding new ways to delight their fans. This Sunday’s show was no exception.

It all began during the episode “The Gayle Tales.” Looking for a way to escape unfair grounding, Tina, Gene, and Louise compete for a chance to accompany their Aunt Gayle to “Yarnival,” the cat equivalent of Cirque du Soleil. To win the prize, the children write short stories starring their aunt and of course, her crush Scott Bakula.

While Gene and Tina’s tales delight, it’s Louise’s imaginative cat-centric take on Game of Thrones that truly takes the cake. In the aptly named epic “Gayle of Thrones,” Louise paints her aunt as Queen Gayle of Catsteros. Accompanied by her beloved catdragons, the powerful Queen Gayle rules over all of the nine cat life kingdoms with an iron fist. That is until Gene, a Warlock from the House of the Unfarting, comes to steal them.

From there, the vignette quickly spirals into madness as the Bob’s Burgers writers find a way to spoof every aspect of the HBO hit. From Teddy as a mindlessly boring White Talker, to Mort as The Mortan, this Game Of Thrones crossover has all your favorite characters and then some. But forget about evil Lindaria and her Moon Door, the only thing we want more of is Bobdor, the show’s homage to everyone’s favorite feeble-minded giant.

If you didn’t catch last night’s amazing homage, then have no fear. Some Internet hero has condensed the whole tale for your viewing pleasure.