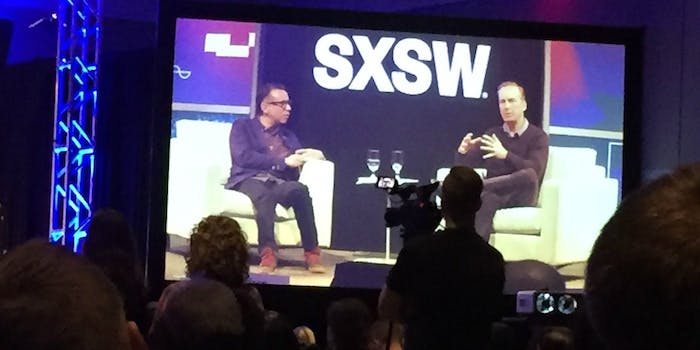 Bob Odenkirk on ‘Better Call Saul’, ‘SNL,’ and his next AMC project

He's getting more comfortable as Saul.

During a conversation with Fred Armisen on Sunday, Bob Odenkirk recounted that when people see him on the street, they typically call out the same name. It happened at SXSW, when a woman grabbed him and yelled, “Saul!”

“You’re an object from TV that’s in the world,” he said.

Odenkirk was in the world at SXSW to promote the new season of Better Call Saul; the hit spinoff of Breaking Bad. A downtown Austin parking lot was even turned into a Los Pollos Hermanos. Odenkirk explained that “Better Call Saul, boy oh boy, that was a risk.” The show was going to be different at the beginning, but the creators decided to do an origin story instead.

“I didn’t really take anything into account until the billboards went up,” Odenkirk said.

Odenkirk has had a long comedy career that includes The Larry Sanders Show, Mr. Show, SNL, and more recently, Netflix’s W/ Bob and David and Girlfriend’s Day. But Breaking Bad and Better Call Saul pivoted him into a more dramatic role. He initially had some concerns with Saul that the Breaking Bad audience might not give it a chance, but explained he became more involved in the third season, which he promises has “legitimate comedy in it.”

Armisen revealed Odenkirk gave him his break on TV, and cast him on a Fox pilot called Next! right after Mr. Show ended. It was “Mr. Show without the angry beans in it,” Odenkirk said. It didn’t get past the testing audience, and he recalled one man who didn’t like any part of the show, but still gave it an 8 on a scale of 1 to 10. His reason? “I don’t know. Could be good.”

Armisen moved on to other parts of Odenkirk’s career: He showed the Mr. Show clip “The Story of Everest” as an example of a perfect sketch. A man (Jay Johnston) knocks down a thimble display over and over, while telling his family a harrowing story about climbing Mt. Everest.

Odenkirk says Mr. Show was difficult to produce, and they tried to make it “generic enough” that it could live on past the late ‘90s. Looking back at SNL, where he was a writer from 1987-1991, Odenkirk said it was “personally difficult” for him, and he wasn’t tough enough emotionally to handle the stress.

“I learned a lot [there] that I used on Mr. Show,” he summed up, adding that he thinks SNL is doing an amazing job right now and said it’s “maybe better than it’s ever been.”

As for future projects, Odenkirk confirmed he’s working on another show for AMC: an adaptation of The Night of the Gun, the memoir of late journalist David Carr.

“It’s important to tell a story about a journalist right now,” he said.